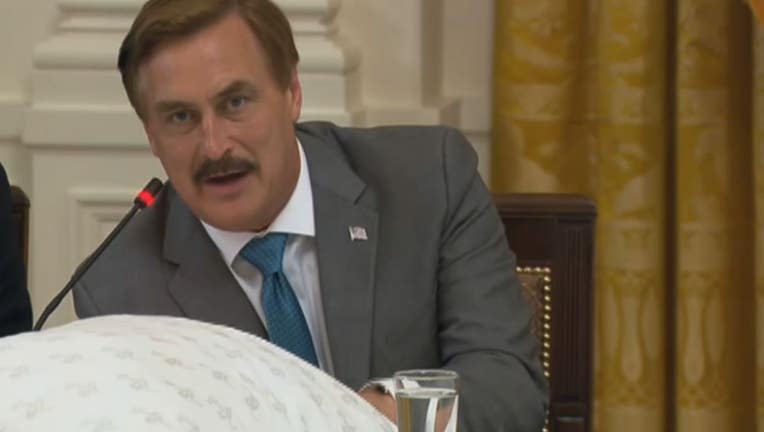 After his cellphone was seized by authorities at a Mankato Hardee's last week, My Pillow founder Mike Lindell has filed a lawsuit alleging the FBI and Department of Justice violated his rights protected by the Constitution. (FOX 9)

(FOX 9) - After his cellphone was seized by authorities at a Mankato Hardee's last week, My Pillow founder Mike Lindell has filed a lawsuit alleging the FBI and Department of Justice violated his rights protected by the Constitution.

On Sept. 13, federal agents seized Lindell’s cellphone, through a warrant issued by Judge Tony Leung on Sept. 7, in an effort to "gain access to multiple categories of data collected" on it.

Later that evening, on a video version of his podcast Lindell displayed a letter signed by an assistant U.S. attorney in Colorado that said prosecutors were conducting an "official criminal investigation of a suspected felony."

According to Lindell, agents questioned him about Dominion Voting Systems, Mesa County Clerk Tina Peters and his connection to Doug Frank, an Ohio educator who claims voting machines have been manipulated. Questioning lasted approximately 25-30 minutes before his phone was also taken.

"Without commenting on this specific matter, I can confirm that the FBI was at that location executing a search warrant authorized by a federal judge," FBI spokeswoman Vikki Migoya said in an email statement following the incident.

‘Who are you people? What do you want?’

According to the complaint, at around 4:00 a.m. on Sept. 13, Lindell drove from his home in Minnesota with a close friend to go duck hunting in Iowa.

After finishing their trip, Lindell began driving back home when he pulled his truck into the drive-thru window at a Hardee’s in Mankato, Minnesota.

Lindell alleges that prior to the trip, he did not inform the defendants, "where he was going, that he was hunting, the route he would drive back from hunting, or the fact that he made an impromptu stop at the fast food restaurant."

In order to know his location, Lindell alleges the agencies, "used cell site location information or a tracking device to locate and track Mr. Lindell without first securing a warrant for that purpose."

As Lindell was leaving the drive-thru, an unmarked vehicle operated by a federal agent in street clothes abruptly moved in front of his truck, blocking any forward movement, according to the complaint. A second unmarked vehicle then blocked him from the right, as well as, a third from the back – effectively blocking him in.

Not knowing that the individuals in the three vehicles were federal agents, Lindell said he "was prepared to ram one of the vehicles to escape" but instead asked in a loud voice, "Who are you people? What do you want?"

He was then questioned, "In what appears to be an effort to elicit allegedly incriminating evidence," according to the complaint.

According to Lindell’s complaint, throughout the process the federal agents, "deprived him of his freedom of movement since he was not free to leave the drive-thru lane. They also did not read his Miranda rights or advise him that he had a right to have a lawyer present while being questioned."

When informed that agents had a warrant to seize his cellphone, Lindell protested and requested to speak with his lawyer before eventually relenting.

Data collected on Lindell’s cell phone includes attorney-client information and other information protected by the First Amendment’s freedom of association from disclosure to the government, the complaint alleges.

The complaint further alleges that the "use of cell site location information without a warrant" amounts to an unreasonable search and seizure – a violation of the Fourth Amendment.

Lindell’s Fifth Amendment Due Process Clause was also violated when, "the government acted in bad faith in intentionally withholding information when it applied for the warrant," according to the complaint.