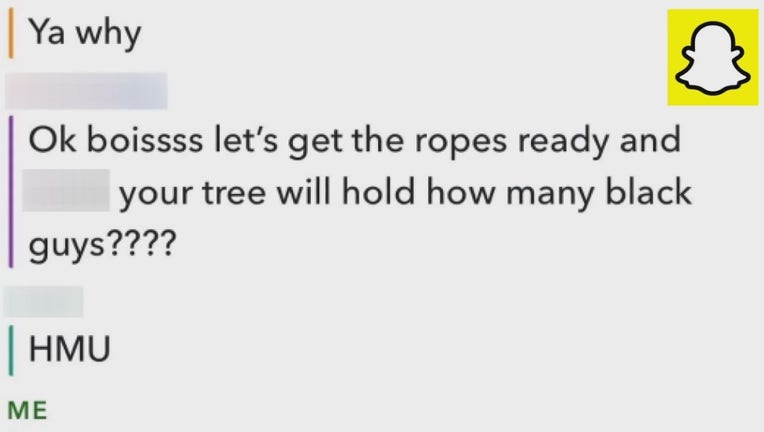 One of the racist Snapchat messages teen Olivia Williams received said in part, "get the ropes ready". (FOX 9)

COLD SPRING, Minn. (FOX 9) - It’s the kind of language that startles and stuns most people. Racist to say the least with the n-word and phrases like "I will beat the Black right out of you" and "Get the ropes ready."

The ones saying these words are teenagers and on the receiving end is Olivia Williams, a 15-year-old freshman at ROCORI High School in Cold Spring, Minnesota.

Mom calls for change after daughter bombarded with racist Snapchats

It’s the kind of language that startles and stuns most people. Racist to say the least with the n-word and phrases like "I will beat the Black right out of you" and "Get the ropes ready."

"I mean it did break me a lot," said Williams. "Just knowing there’s people that could do that. Like I said, they didn’t know me, so that hurt a lot at the time."

"She wanted to kill herself, it was to the point of her wanting to take her life," said Andrea Robinson, Olivia’s mother. "I mean it was the point of taking her life."

It started months ago and Williams says they don’t stop. Her mom couldn’t take it anymore, couldn’t sleep, and at 2 a.m. last Saturday recorded a Facebook video that has now been viewed 6,000 times.

When the Snapchat messages became more frequent, around December, Robinson said she did reach out to the parents of the teens to talk. Some responded, others didn’t. Police got involved, but told FOX 9 there really wasn’t anything criminal about it all and that Robinson indicated she would deal with it. Robinson says the school district didn’t respond, which is what has her most upset.

"I want the school to acknowledge it’s an issue," she said. "It’s been a long-standing issue."

This week there has been a little conversation between Robinson and the district. FOX 9 spoke to the superintendent on Tuesday. After initially getting no comment, on Wednesday, a letter encouraging inclusivity was sent out to ROCORI families.

The letter reads in part, "We acknowledge that we have work to complete and that not all our students feel comfortable. However, actions speak louder than words and we must hold each other and ourselves accountable."

Robinson says she’d like to see some action taken.

"Something has to change and the children need to be disciplined," she said.

Some might say there’s an easy way to remedy this: delete social media.

"Me and my friend were talking about that the other day, like we might delete Snapchat," said Williams. "I don’t know. I just don’t have any other apps that I have everybody else on. I don’t have everyone’s number. I don’t know."

Williams says she does have supportive friends and is learning she has a lot more support than she thought she did, realizing she’s not the one that needs to change.

"I’m more sorry for them, that they feel that way," said Williams. "Or that they grew up to think that’s okay then I am sorry for myself because I’ve gone through it for so long."

"The past few days I feel more part of the community than we ever have," said Robinson. "I mean we have an outpouring of support from our community."

It should be noted FOX 9 only had access to half the conversations. The racist comments go on to say, "I just want to know how many more n-words are going to die tonight?" and "Ship you back to the cotton fields." There’s also the one to the teen that reads, "Kill yourself."

Robinson purposely wanted to keep the names of the teens out of this story and says in the end, she wants kindness, inclusivity and change.  She’s hoping that opening up the conversation will help get everyone on that path.