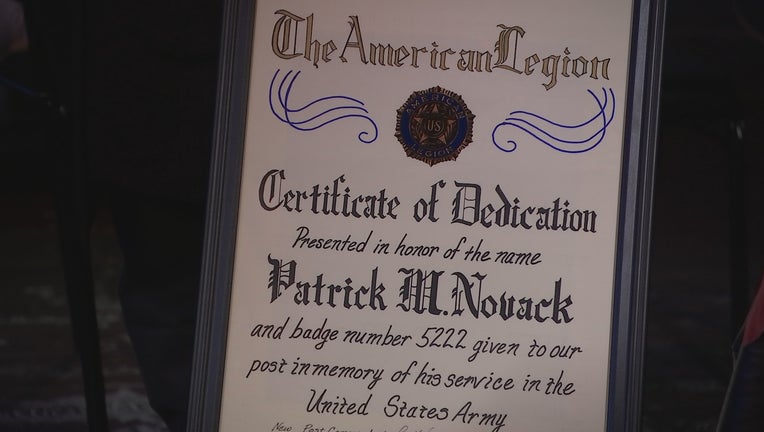 MINNEAPOLIS (FOX 9) - For the first time in six years, the American Legion is opening up a new post in Minnesota.

Right by the light rail and less than three miles from the VA hospital, the Cardinal Bar and Restaurant is the perfect place for Minnesota’s newest American Legion post.

For the first time in six years, the American Legion is opening up a new post in Minnesota.

When it came to dedicating the post, legion officers had the perfect person in mind. The post will be no. 5222, a number that carries strong meaning in the Minneapolis community. For 30 years, it was on the badge of fallen Minneapolis police officer and Vietnam War veteran Patrick M. Novack.

“He did four tours in Vietnam, and came home with two Silver Stars, and three Bronze Stars and a Purple Heart,” said Michael Novack, Patrick’s son.

His number is now on the caps of the newest American Legion post members.

“This is a chance for me to honor my father for his service in Vietnam,” said Novak.

For those running Cardinal Bar and Restaurant, becoming the home for the legion was an easy decision.

“They asked if they could have their meetings here and we were like, ‘Yeah that’s great!’” said Noel Casey of Cardinal Restaurant. “We felt honored.”

Under the guidance of the Post’s new commander, Teresa Huberty, Post 5222 gathered all its necessary members and found its new home in less than six months.

“We need to continue to get our name out there – for other veterans in the area, and outside the area, that hey, the American Legion is still here, we are continuing to grow,” said Huberty.

To start a new post, the American Legion needs 15 members. Following Thursday night’s ceremony, Post 5222 has nearly doubled their number to 29 - full of members proud to represent no. 5222 in Minneapolis.

“His name will forever go on in the American Legion,” said Maxa.