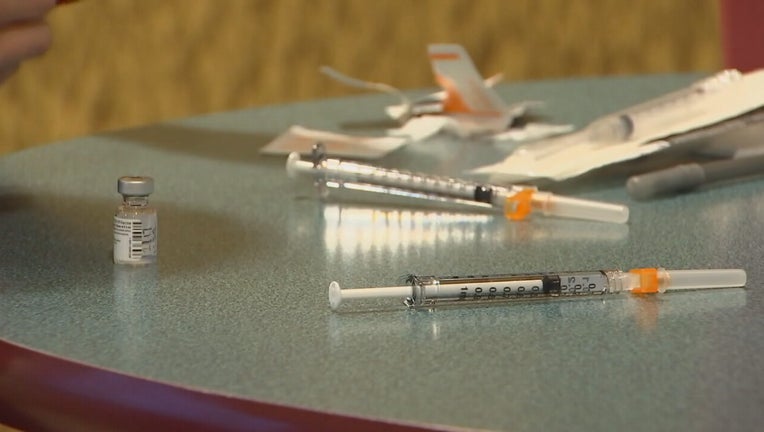 COVID-19 vaccines at a community vaccination clinic in Minnesota. (FOX 9)

Roughly 80,000 of the 500,000 people in Phase 1A have not been vaccinated, Minnesota public health officials told lawmakers Wednesday, despite earlier pledges to schedule them for shots by the end of January.

Minnesota health officials are scrambling to find all the health care workers still waiting for vaccines.

Private health care providers expect it will take another two or three weeks for all of their workers to be vaccinated. Several have contacted FOX 9 in recent weeks, frustrated by a lack of communication from local health departments.

Dr. Bridget Axelson, president of the Minnesota Optometric Association and an optometrist at North Suburban Eye Specialists, estimated that 60 percent of staff at Metro-area eye clinics have been scheduled for a shot. The percentage is much higher in greater Minnesota, she said.

"It's definitely been more challenging in the Metro," Axelson said in an interview. "I think where the challenge has come is maybe underestimating the number of nonaffiliated health care providers -- small, independent optometry clinics."

Sarah Derr, executive director of the Minnesota Pharmacists Association, said pharmacists were also frustrated by the lack of vaccine availability in January. But there's been an improvement: Derr said the number of complaints has gone down in the past week or two.

"It sounds really promising that we will be able to get all of Phase 1A done in the next couple of weeks, maybe three weeks, and we can move on to 1B," Derr said in an interview.

At first, Minnesota health officials stuck to their plan to vaccinate health care workers and long-term care residents first, even as other states broadened eligibility to seniors and other essential workers.

But by mid-January, Minnesota changed course and made roughly 1.1 million more people eligible, including people age 65 and older, teachers and child care workers.

That stretched an already limited vaccine supply -- until a boost this week, Minnesota's federal allotment has averaged about 65,000 doses per week -- lengthening the timeline for Phase 1A vaccinations.

During a Senate committee hearing Wednesday, Ehresmann said that each vaccinated person -- regardless of what priority group they're in -- would protect Minnesotans.

"Every person that gets vaccinated in Minnesota benefits all of us," Ehresmann said.

Minnesota will get 83,825 first doses from the federal government each of the next two weeks. Health officials estimate an additional 16,900 doses will go to chain pharmacies under a new retail pharmacy program announced by the Biden administration this week. It will launch on Feb. 11.