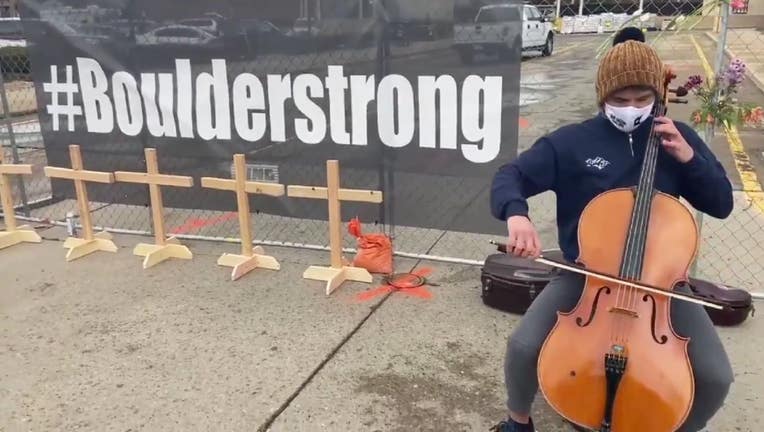 Louis Saxton of Bemidji, Minnesota survived the mass shooting at a supermarket in Boulder, Colorado. In honor of those who died, he plans to play his cello outside the store for 10 days. (FOX 21)

BOULDER, Colo. (FOX 9) - A college student from Bemidji, Minnesota who survived the Boulder, Colorado supermarket shooting is helping others heal through music.

For Louis Saxton, music is therapy. His cello is the accompaniment to both his joy and his sorrow.

"Music is one of those rare universal languages that helps people tap into an inner voice or inner emotion and is extraordinarily powerful when something so tragic occurs," said Saxton.

Tragic is exactly how he would describe what happened Monday afternoon in Boulder. The University of Colorado freshman witnessed the mass shooting at a grocery store he frequents. The incident left ten people dead.

"As I was walking out with my stuff, a guy yelled at me to run and so I didn’t think of it, I just dropped my bags and I ran to my car, drove over the curb and got as far away as I possibly could," said Saxton.

Still shaken, he returned the following day — cello in hand.

"I just—I felt like I had to do something and that was the first thing that came to mind," said Saxton, who is a music major at the University of Colorado.

He says he plans to come back and play for the next ten days — a day for each life lost.

"I’m really hoping that other people appreciate it and are able to feel something with the music," he said.

He hopes to offer a note of healing among the hurt.

"I hope that my music is able to help anybody process this because I still am and it’s going to be a while," said Saxton.