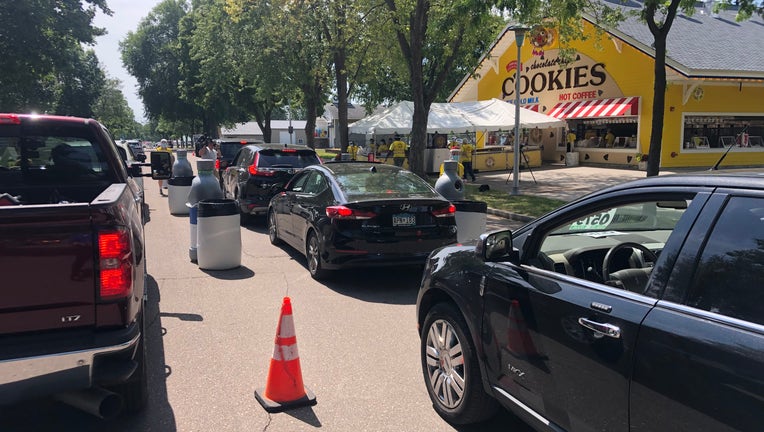 FALCON HEIGHTS, Minn. (FOX 9) - If you missed out on Minnesota State Fair’s drive-thru food experience this summer, you’ll get a second chance to get your fair food fix this fall. The State Fair announced Tuesday it is bringing back its Food Parade for an encore in October.

The Fall Food Parade will take place over two weekends, Oct. 1-4 and Oct. 8-11. Parade-goers will drive along a 1.5-mile route through the fairgrounds and nom on food and drinks from 16 different vendors, including previous attendees such as Sweet Martha's and Pronto Pups as well as new ones like Minneapple Pie.

The wait is over and the gates are open for the first-ever State Fair Food Parade at the Minnesota State Fairgrounds.

It won’t just be the usual mini donuts and cheese curds at this Food Parade, however. The State Fair says several vendors are offering fair favorites with a fall-inspired twist including pumpkin spice funnel cakes, hot apple cider and deep-fried pumpkin pies.

Due to high demand for tickets to the first Food Parade, this time around, tickets will be sold through a random electronic lottery process. Anyone can sign up to be entered into the random drawing for tickets starting today through Sept. 17. All registrants will be notified by 8 a.m. on Monday, Sept. 21 whether they have been randomly selected to purchase a vehicle ticket.

Otherwise, the same rules apply as before: each vehicle ticket includes entrance to up to five people. Food purchases are not included in the ticket prices.

You can register to be entered into the Minnesota State Fair Fall Food Parade ticket lottery here.