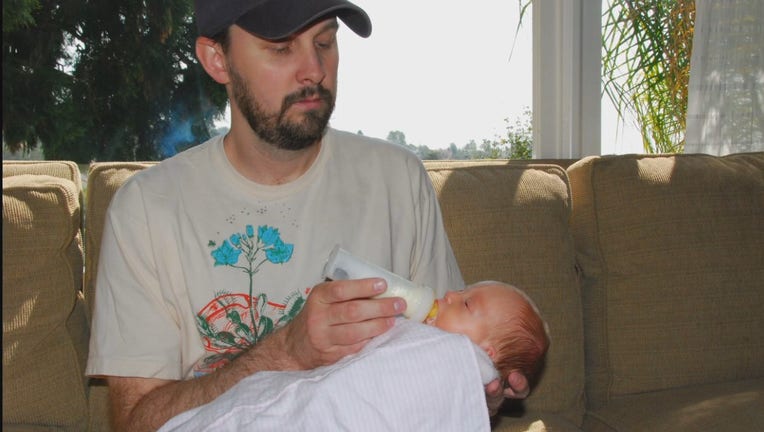 Matt Logelin bottle feeds his daughter Maddy. Logelin's wife died a day after giving birth to their daughter. Their story has now been turned into a movie on Netflix. (Matt Logelin)

(FOX 9) - The number one movie on Netflix "Fatherhood" tells a story of love and loss and it is based on the life of a Twin Cities native.

"It's really mind blowing you know. I never thought this would happen," said Matt Logelin.

A new hit movie on Netflix has a Minnesota connection.

Logelin's life has been both a fairytale and a nightmare.

"It was never my goal to have a movie made of my life," said Logelin.

Matt and Liz Logelin were high school sweethearts in the Twin Cities before moving to California and getting married. Soon, they had a baby on the way.

However, Liz only got to meet her daughter Maddy once in the delivery room because 27 hours after she gave birth, Liz collapsed. She later died from a blood clot that moved from her legs to her lungs, blocking off her oxygen.

"I was in the midst of celebrating this absolutely momentous moment in our lives with our daughter being born," said Logelin. "Then, a short time later, my wife died and there is nothing in the world that can prepare you for that."

Through his grief, he poured himself into being the best father he could be to Maddy, taking her to many of the same places he had visited with her mom. His blog about his struggles as a single father and widow became a book, which was eventually turned into the movie "Fatherhood." Logelin's character is portrayed by African American comedian Kevin Hart, who wanted to use the story to change the narrative about Black fathers in Hollywood.

"It’s an opportunity to take a story that is pretty universal in love, death, happiness and sadness and everything in between, but we get to tell from a different perspective," said Logelin.

Even though Logelin is remarried to another Liz and Maddy has a little sister with another on the way, he hopes "Fatherhood" shows even the saddest stories can have a happy ending.

"I hope people see this movie and say if this dad can do this in the midst of these happy moments and the most difficult moments and find a way to be a better father than you would have expected him to be, then hopefully people will find some inspiration in that," he said.