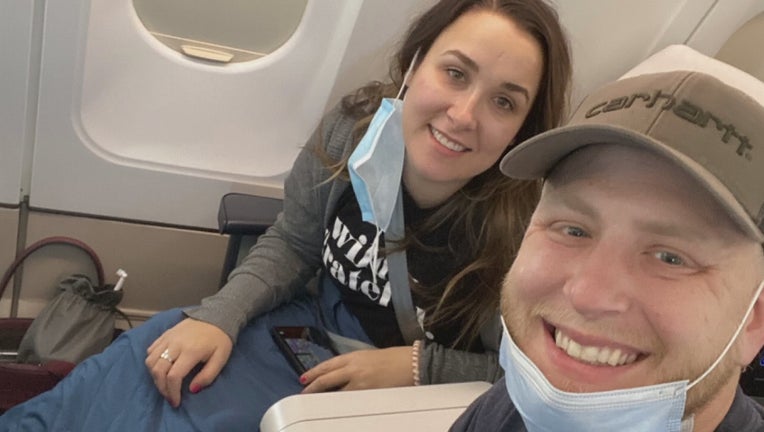 (FOX 9) - Casey McCoy and his girlfriend thought they were jetting off on the trip of a lifetime to the African country of Togo to be a part of his best friend's wedding in mid-December.

"The whole experience prior to the 23rd has been just remarkable. It's a beautiful country. The people are fantastic," said McCoy.

Casey McCoy and his girlfriend thought they were jetting off on the trip of a lifetime to the African country of Togo to be a part of his best friend's wedding in mid-December.

"When I got to the airport, they ran a code on there, and it showed it's positive."

But things quickly turned for the Minneota, Minnesota native after he tested positive for COVID-19 and was forced to quarantine in a hotel there.

"They put me in this ambulance, lights and sirens, military escort, and they pulled up in this back alley of a hotel, and I've been here since," said McCoy.

For the last 11 days, he claims he's had to deal with unsanitary conditions and inconsistent food and water.

"I'm given one liter of water a day, and that's not always a given."

The process of getting home has been confusing. On Sunday night, Casey got the news he tested negative and thought he was clear to come home. He later learned he would be held there until Tuesday and would need to be tested again.

Casey admits he's heard some negative comments from people on his ordeal but insists he did his research on the country's infection rates and took all the necessary precautions. He now has one piece of advice and three simple words for anyone looking to travel abroad during a pandemic: don't do it.

Casey has been working with the U.S. Embassy in Togo. It's still unclear when he will get the green light to come back home to the United States.