Blaine native Pam Sorenson is a mixed martial arts veteran, but what led her on a path to the fight game, is a much more complicated story.

(FOX 9) - Blaine native Pam Sorenson is a mixed martial arts veteran, but what led her on a path to the fight game is a much more complicated story.

"She had texted me in the morning because we were roommates," Pam said.

The "she" Pam refers to was her roommate Mandy, who sent Pam a happy birthday text one morning back in 2012. What happened soon after was a complete shock.

"I think less than an hour later, I went upstairs and was like oh, she’s right up stairs, I’m going to go talk to her instead of texting her back," Pam recalled. "And she was down on the kitchen floor, like, gone."

Mandy’s sudden passing sent Pam into a state of depression.

"Other than going to work, I just sat either in the garage or in the basement or out in the patio and I just did nothing," she said.

As weeks went by, Sorenson knew she needed a change in her life and that’s when she discovered the cellar gym and that’s where things began to turn around.

"She kind of needed a place to kind of have a release, a little mental release," he said.

Not only did mixed martial arts help Pam get back in shape, she discovered that she was talented enough to go pro, which was a surprise to Pam’s father.

"At first he was like, ‘you’re doing what? What are you doing? You’re going to go and kickbox in a ring with somebody else is training to beat you up?’" she said. 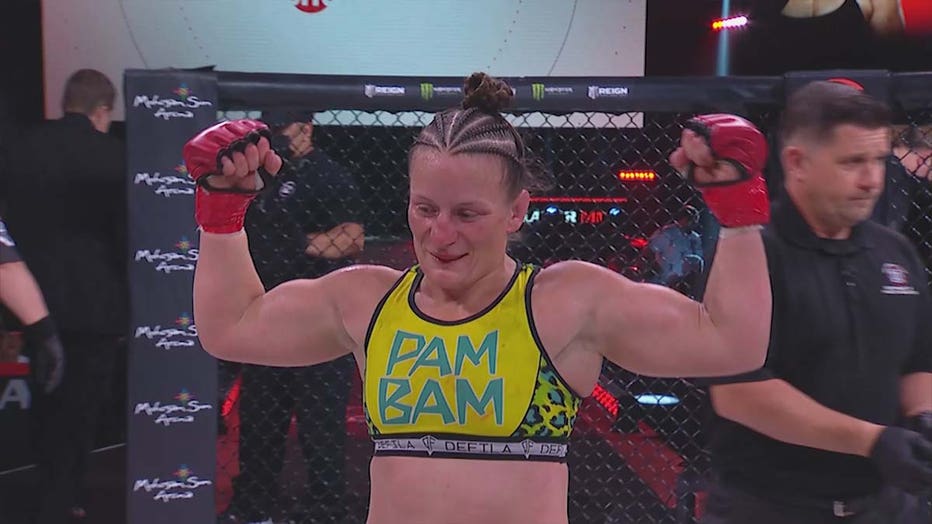 But after going 8-3 in 11 professional fights, Sorenson is thriving. The shots she takes in the octagon may cause her physical pain, but as Sorenson tells us the fight game has helped heal the emotional pains of the past.

Pam told FOX 9 she still keeps in touch with Mandy's family, and they have attended her fights in the past. Mandy's parents do not wish to have the details of Mandy's passing disclosed.