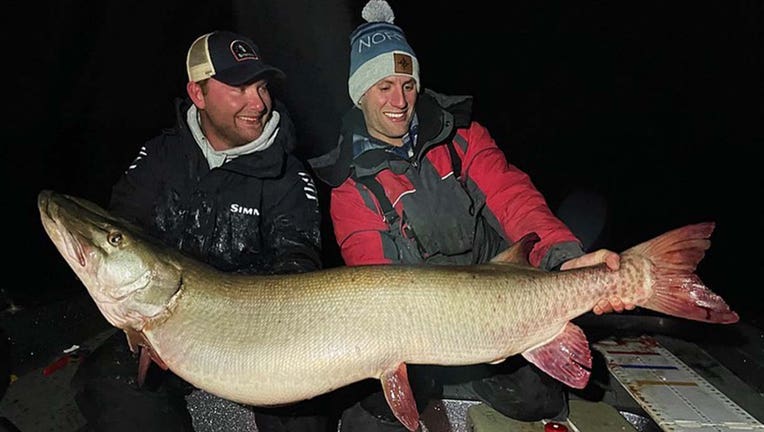 (FOX 9) - A Plymouth man appears to have broken a 64-year-old state record during his last fishing trip before the freeze on Lake Mille Lacs Monday night.

27-year-old Nolan Sprengeler and his two friends were fishing on one of the state’s largest lakes when he felt a tap around 9 p.m.

"After a quick battle and a few ridiculous head shakes we had it in the bag. I didn’t realize how giant this fish was until I pulled it out of the net," Sprengeler wrote on Facebook, sharing pictures of his big catch.

The captured muskie tipped the scales at 55 pounds, 14.8 ounces. Sprengeler wrote that it measured 57.75 inches in length with a 29-inch girth. The previous Minnesota record for heaviest muskie, 54 pounds, was set in 1957 on Lake Winnibigoshish.

He and his friends had to break ice for about 100 yards to find open water.

"We had thought about fishing after Thanksgiving, but looking at the temperatures we figured we better go Monday night," Sprengeler said. "We weren’t sure we could get on the lake after that."

Sprengeler hooked the fish while casting a large soft-plastic bait to a rock reef. He said the three of them worked for an hour to try to revive the fish, but to no avail.

Instead, he eventually drove to a renowned taxidermy in Conover, Wisconsin, where owner Rick Lax agreed to make a traditional skin mount for the fish and create a mold from it so replicas can be reproduced in a method that Lax’s father helped pioneer.

Minnesota Department of Natural Resources officials say all the required paperwork, including witnesses and notarized signatures, seems to be in order.

The official world record recognized by most organizations is Louis Spray’s 69-pound, 11-ounce muskie that was caught in 1949 on the Chippewa Flowage in northwestern Wisconsin.