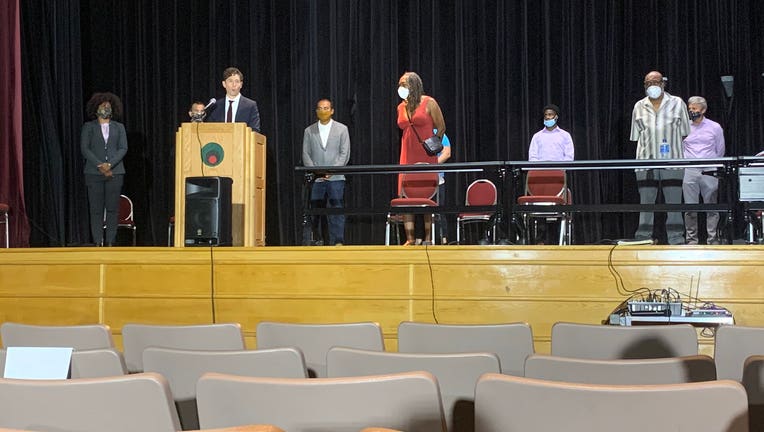 MINNEAPOLIS (FOX 9) - Minneapolis Mayor Jacob Frey reaffirmed his opposition to abolishing the city’s police department Monday, saying his idea of reform has more to do with changing the department’s relationship with the police union.

Frey shared his thoughts on the department after a news conference with city and community leaders where he announced the creation of the Minneapolis Forward Now Coalition, designed to help rebuild areas of the city impacted by the looting and rioting after the death of George Floyd.

City council leaders join calls for MPD to be defunded

A vetoproof group of Minneapolis City Councilmembers joined a rally Sunday calling for the police department to be defunded.

When asked about the nine-member majority of Minneapolis City Councilmembers that held a rally Sunday to announce their support for de-funding and dismantling the department, Frey said he is “entirely committed to seeing through massive, transformational and structural reform as to how the Minneapolis Police Department operates.”

Frey said he hopes to harness the community’s energy for change, but noted that past mayors and police chiefs have been unsuccessful in their attempts to reform the police department due to the Minneapolis Police Federation.

“Unless we are willing to tackle the elephant in the room - which is the police union - there won’t be a culture shift in the department.”

Frey pointed specifically to the collective bargaining and arbitration processes currently in place, which he said keeps the city from terminating officers who have exhibited wrongful conduct.

He said his office is beginning the process of looking through the city’s relationship with the union with a “fine-toothed comb” to better understand how his office and city council can enact change and what needs to be handled at the state level.

The reason for Frey’s news conference Monday afternoon was to announce the newly formed Minneapolis Forward Now Coalition, which is made up from community leaders from the Lake Street, the Northside and the Minneapolis Foundations.

The coalition will seek to help rebuild the areas of the city impacted by looting and rioting. The goal is to help restore businesses, property owners, residences and provide food and transportation to those who cannot make up the losses they sustained through insurance.

Frey made it clear that the overarching goal of the coalition is to address racial inequities in the recovery process, too.