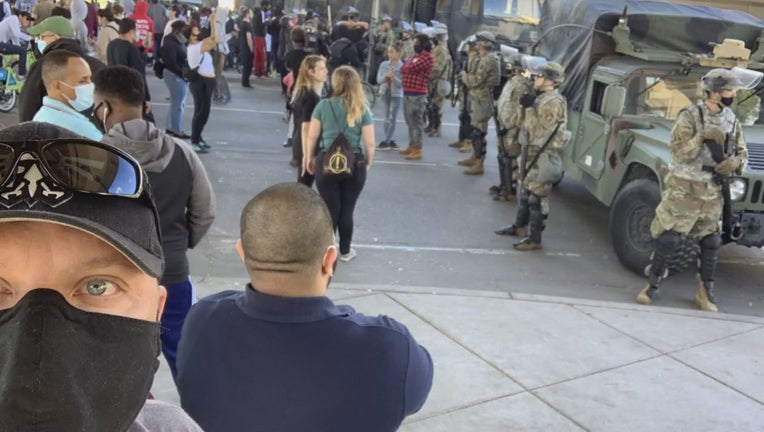 MINNEAPOLIS (FOX 9) - A Minneapolis business owner has been charged in connection to the riots that followed George Floyd's death, but he says the reason he was out past curfew was to help protect his community from further damage.

For 20 years, Scott Nichols has been a professional balloon artist for kids of all ages. But his experience during the chaos and confusion in south Minneapolis a week and half ago has left him feeling a little deflated.

A Minneapolis business owner has been charged in connection to the riots that followed George Floyd's death, but he says the reason he was out past curfew was to&nbsp;help protect his community from further damage.

“Every day is a challenge,” said Nichols. “It’s ups and downs. I'm trying to do the best I can like everyone else to try and maintain."

On Friday, May 29, Nichols says he and a friend went out to see what was going on with protests in his neighborhood, which is just a few blocks from E 38th Street and Chicago Avenue where George Floyd was killed on Memorial Day.

When arson and looting started later that night, Nichols he says he did what he could to keep the peace, like putting out a dumpster fire behind a strip mall across the street from the Fifth Precinct. He says he was also trying to maintain a safe distance from the crowds because of COVID-19.

"Anyone who knows me knows I wasn't out there to hurt anyone or damage property or to cause any trouble at all,” said Nichols. “I was just out there to try and help."

Nichols says after he decided to go home, a truck pulled up with police officers shooting rubber bullets. He was arrested, taken to jail and held in solitary confinement for two days until he was released Monday morning. While he was in custody, Nichols says he missed his son's high school graduation, but he was able to call twice from jail to apologize.

"I called him while he was in his car doing his parade,” said Nichols. “I told him how proud I was of him and really wish I could have been there for his big day."

Nichols says he was charged with rioting and being out after curfew. After seeing all the devastation, he says he understands why police had get people off the streets. As someone who tries to lift spirits with his inflated creations, Nichols says his bubble has been burst.

"It definitely was an experience I wasn't expecting when I decided to go out and help my neighbors," he said.