National Wreaths Across America Day 2019: How to get involved

The event takes place at Arlington National Cemetery and more than 1,600 locations in the U.S. and abroad.

WASHINGTON - More than 2 million volunteers will place wreaths on veterans’ headstones across the United States as part of National Wreaths Across America Day.

Observed annually, this year’s event falls on Dec. 14 and honors the men and women throughout history and the present day who have fought for our country’s freedom. “Everyone plays a part” is the 2019 theme.

The event, coordinated by the nonprofit Wreaths Across America, is held at Arlington National Cemetery in Virginia, as well as more than 1,600 locations in all 50 states, Puerto Rico and national cemeteries abroad. 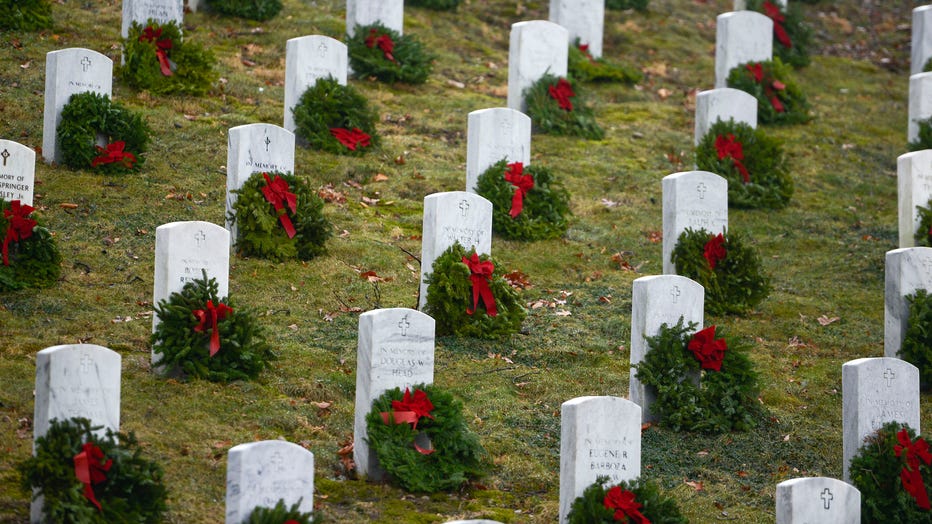 Those who would like to get involved can do so by sponsoring a veterans’ wreath at a nearby cemetery, volunteer to place wreaths on gravestones or start a local fundraising group.

For those without a location near them, volunteers can also coordinate and host a ceremony in their area.

“In many homes, there is an empty seat for one who is serving or one who made the ultimate sacrifice for our country,” Wreaths Across America states on its website. “There is no better time to express our appreciation than during the hustle and bustle of the holiday.”

National Wreaths Across America Day began with an annual tribute by Morrill Worcester, owner of Worcester Wreath Company of Harrington, Maine. The company had a surplus of wreaths in 1992 and arrangements were made for the wreaths to be placed at Arlington National Cemetery in one of the older sections of the cemetery.

Other individuals and organizations began stepping up to help, and the tribute continued for several years until 2005, when a photo of the gravestones adorned with wreaths at Arlington started being circulated around the internet.

As a result, people from across the country wanted to get involved and emulate the project at local cemeteries.

In 2007, Worcester, along with veterans and other groups, formed Wreaths Across America to continue and expand the effort, as well as support other groups around the country who wanted to do the same.

In 2018, nearly 1.8 million veterans’ wreaths were placed at 1,640 participating locations — and the event expanded with the placement of more than 9,000 wreaths at Normandy-American Cemetery in France.

For a complete list of participating locations, visit WreathsAcrossAmerica.org.

RELATED: 'Band of brothers': Guards keep eternal watch over Tomb of the Unknowns for those who made ultimate sacrifice