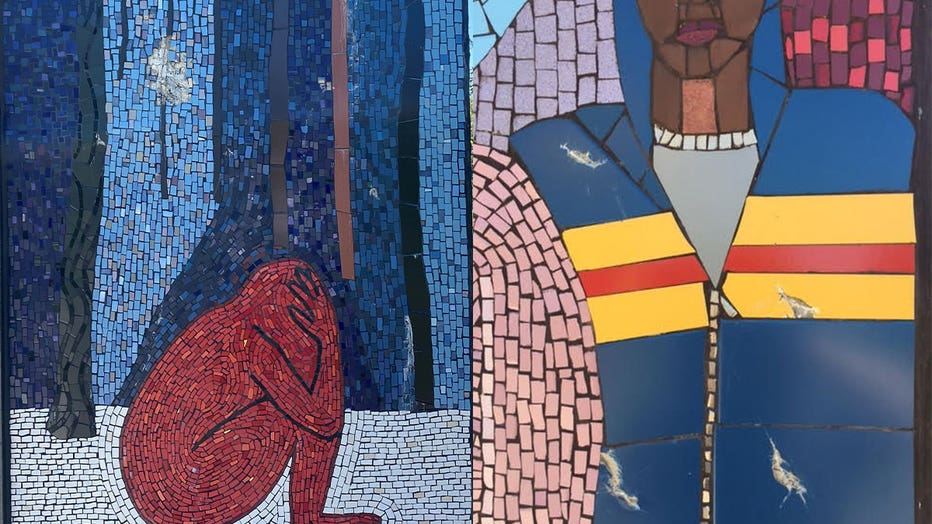 Photos show the damage to mosaic artwork at the Memorial to Survivors of Sexual Violence at Boom Island Park in Minneapolis. (Sarah Super / Survivors Memorial)

Super says this is the first time the memorial has been targeted since its unveiling in October 2020.

The memorial, located on the south end of Boom Island Park, was inspired by stories of women who survived sexual violence. Park police are investigating the vandalism. At the same time, a spokesperson says that the Minneapolis Park and Recreation Board is working with the memorial organizer and artist for repairs.

"It's heartbreaking and sickening," said artist and sexual violence survivor Lori Greene. "It feels as though whoever did this had a vendetta."

Greene designed the mosaic artwork that was destroyed. She hand-cut and hand-laid each piece, taking one year to complete the entire installation.

The memorial was the first of its kind nationwide when it was finished in September 2020. Its purpose is to recognize the trauma of sexual violence and give victims somewhere to heal and reflect.

The first permanent and public memorial honoring survivors of sexual violence is now open at Boom Island Park in Minneapolis for anyone to visit.

"I still want people to come here," said Greene. "If people come here with love and an open heart, that will help to heal the space again."

A pair of researchers were the first to report the vandalism Monday morning. As criminology professors at California State University, they’ve been studying the memorial and visitors’ perception of it since the design phase.

"People had an idea that this might happen," said Dr. Nicole Fox.

Greene said they will repair the memorial.