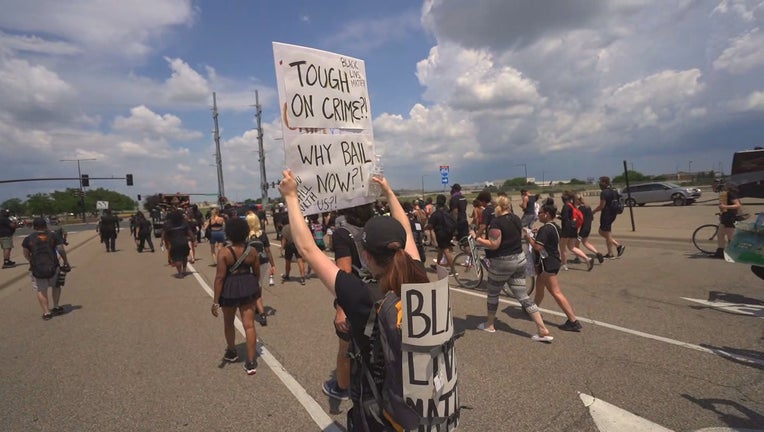 MINNEAPOLIS (FOX 9) - Through the heat, a group of demonstrators made their way Sunday from the Mall of America to 38th and Chicago in Minneapolis, the corner where George Floyd was killed more than 40 days ago.

The intersection remains blocked off and a monument garden has gone up in the middle of the street. Demonstrators with the 10K Foundation marched six miles to the spot, to continue their call for justice.

Through the heat, a group of demonstrators made their way Sunday from the Mall of America to 38th and Chicago in Minneapolis, the corner where George Floyd was killed more than 40 days ago.

"We're in the cities," Daniel added. "We see all the Black lives matter signs. We see all of the 'no justice, no peace' signs. But, as soon as you cross that border in to the 'burbs, you stop seeing the signs. So what’s happening? Do they not care about that stuff in the suburbs?"

Organizers with the 10K Foundation say that’s one reason they started their march in the suburbs at the Mall of America. Marchers made the more than six-mile trek to 38th and Chicago while calling the event: "New America."

Marchers like Michelle Hill say part of that New America is re-examining traditions like what freedom means on the Fourth of July.

For the youngest of marchers, like Prince JT, a “New America” means working towards unity.

"I just want justice and I want equality for white Europeans and hue people," he explained. "I want them to come together and be free. Be friends."

Along the way, police vehicles blocked traffic and supporters stopped and cheered as marchers walked through the heat. The demonstrators asked that on this Fourth of July weekend, Americans think about the future.

"In order for America to become better we have to experience humility," said Daniel. "We have to admit our faults; we have to see our imperfections."