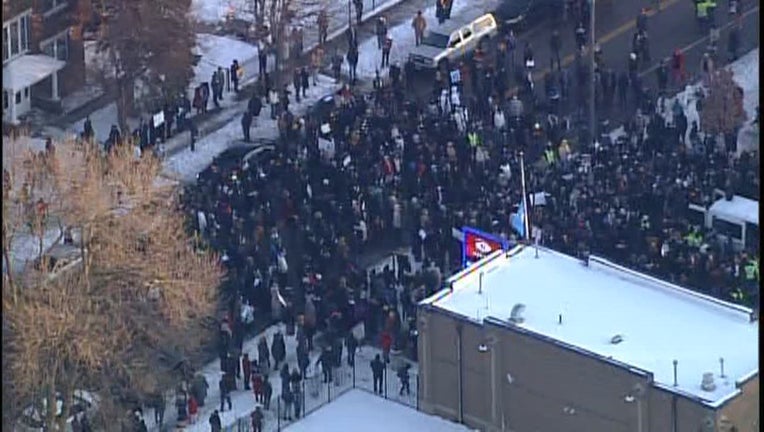 Hundreds of people gathered at the gas station on Cedar Avenue and East 36th Street on Sunday. (FOX 9)

MINNEAPOLIS (FOX 9) - Hundreds of people took part in a rally and march in south Minneapolis on Sunday after a police shooting this week.

The rally, organized in part by the family of Dolal Idd, started around 2 p.m. at the Holiday gas station at Cedar Avenue and East 36th Street, the location where Idd was shot on Wednesday. Protesters blocked traffic on Cedar Avenue in south Minneapolis for several hours.

Marchers take to streets in Minneapolis for rally after police shooting

Hundreds of people took part in a rally and march in south Minneapolis on Sunday after a police shooting this week.

Police say Idd was killed after he fired his gun at police who were trying to make a traffic stop. Body camera video shows squads trying to box in Idd's vehicle, as he tries to drive away from officers. The video shows Idd's driver's side window shatter outward with a puff of smoke before officers open fire.

Protesters demanded release of the full body camera video and not just the angle that was released Friday.

Starting at the gas station, marchers took to the streets, moving around the neighborhood over the course of the next hour before returning to Cedar and 36th.

Idd's father organized the rally, saying, "I need your help. We have to stop with this brutality of police who kill our sons everyday."

He asked the protests to continue.

"We need justice," Idd said. "We don't need peace until we get our justice."