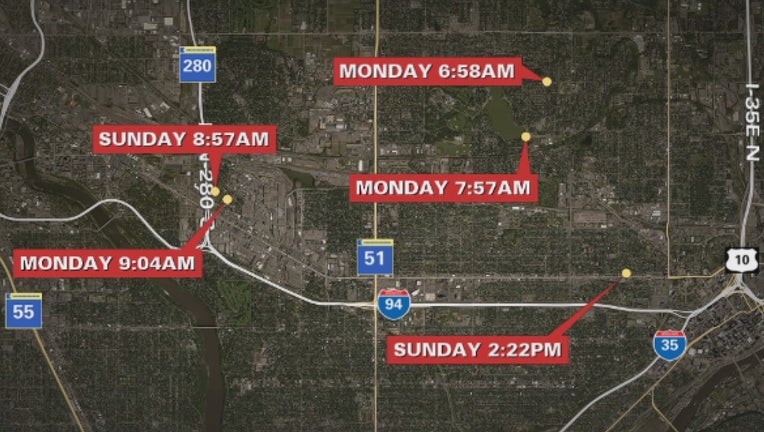 St. Paul police are investigating a rash of robberies Monday.

ST. PAUL, Minn. (FOX 9) - Police are investigating a rash of violent robberies over a two-hour span Monday in St. Paul.

Authorities are trying to figure out if any of these are connected and say they will take aggressive steps to stop this uptick in assaults across the city.

A 56-year-old man was nearly beaten to death for his iPhone Monday as robbery cases increase across St. Paul.

A 56-year-old St. Paul man said he was out for a morning jog Monday near Como Lake when a group of teenagers came up behind him and threw him into a snowbank - all for his iPhone. He asked FOX 9 to conceal his identity for safety reasons.

“You hear about this stuff and, ‘it’s not going to happen to me,’ and it happened. I mean, I could have died,” he said.

Some of the images from his head injury are graphic, but he wants them shared so people understand how serious this problem is.

“They were punching me and kicking me and then using the billy club on my body,” he said.

Surrounded by the suspects, the victim said he tried to fight back. Eventually, they took his iPhone and hopped into a car that police say was stolen and left.

“They did beat me pretty good. I got a bunch of staples in my head and the reason I’m doing this interview is so people can be more concerned of these vicious acts going on,” he said.

Over the course of two hours Monday morning, at least three males are suspected in four different assaults, attacking innocent people for their phones or wallets. One of the victims included a 70-year-old man heading into a church meeting in the St. Anthony Park neighborhood.

St. Paul police said their Gang and Gun Unit is coordinating with other high profile units to gather better information on arresting the people involved.

Police also said robberies are up significantly this year compared to last.

“This is terrible and we take it really seriously, and we are really concerned and we want to work with the community to put a stop to this,” she said.

In the meantime, St. Paul police are increasing their patrols across the city.

FOX 9 reached out to Mayor Carter for comment, but he was unavailable.