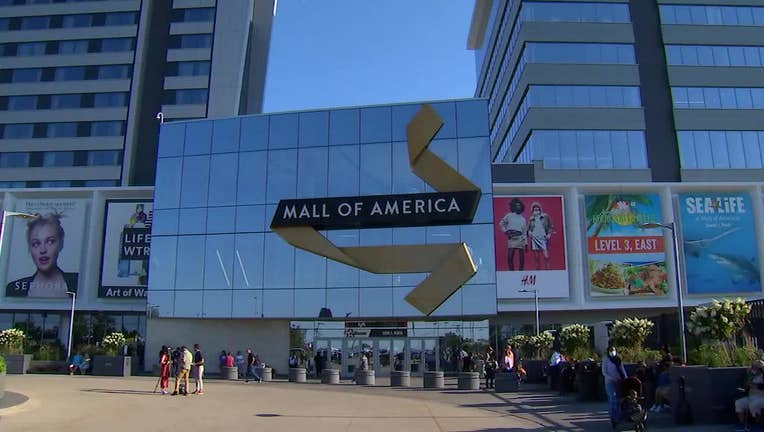 The Mall of America in Bloomington, Minnesota.  (FOX 9)

BLOOMINGTON, Minn. (FOX 9) - A man has been charged, accused of stealing from two stores at Mall of America while carrying a rifle.

Cartier Troy Alexander, 28, of Woodbury, was charged with two counts of first-degree aggravated robbery in connection to the Aug. 26 incident at the Bloomington megamall.

He is expected to make his first court appearance on Aug. 30, court records show.

According to the criminal complaint, Bloomington police responded to Mall of America on Aug. 26 after a man, later identified as Alexander, was seen walking into the Lids store holding a rifle.

Police arrested the suspect and recovered the gun, which was loaded and had a round in the chamber, charges said. In a bag Alexander was carrying, police found several clothing items from the Lids store.

Two Lids employees told police Alexander walked into the store holding a rifle but did not point it at an employee but did rest it on the counter. He walked through the store, pointing out various jerseys he wanted employees to take down for him. He then asked for the tags to be removed and put in a bag, charges said.

Alexander told the workers not to worry about payment, as he had the rifle by his side, the complaint reads. He then took the shopping bag and left the store without paying.

The Lids workers said they were scared of Alexander, with one worker saying he felt like he had to do whatever he said, charges state.

The complaint says Mall of America security told police Alexander robbed a kiosk in the mall the same way, with Bloomington Police Chief Booker Hodges saying on Friday the man was walking around nonchalantly with the rifle, before stealing a charity donation canister at a kiosk. The complaint alleges an employee of the kiosk, which wasn't named in the complaint, said Alexander walked up and grabbed "an item" while holding the rifle, and walked away without paying.

The employee said he saw the rifle, and he didn't want to cause further problems by trying to stop him, charges said.

After Alexander left the Lids store, the megamall's reactionary security team tackled and placed him under arrest without further incident, police said on Friday. No shots were fired.

Alexander told police he went to the kiosk and Mall of America, as well as admitted to carrying the rifle and taking items without paying for them, according to charges.

The mall did not issue a lockdown due to the immediacy of the suspect being taken into custody, according to a statement by mall security.

An initial investigation indicates he also committed a robbery of Twin City Pawn in Minneapolis earlier in the afternoon, according to police.

On Aug. 4, a shooting at the mall started with a conflict between two groups at the cash registers inside the Nike store.

"I cannot overstress enough how the mall security and our teams have worked together," said Hodges, noting he was taken into custody eight minutes after the initial call from a mall patron. "Five years ago he probably gets shot, but today he got tackled. Our plan worked flawlessly."