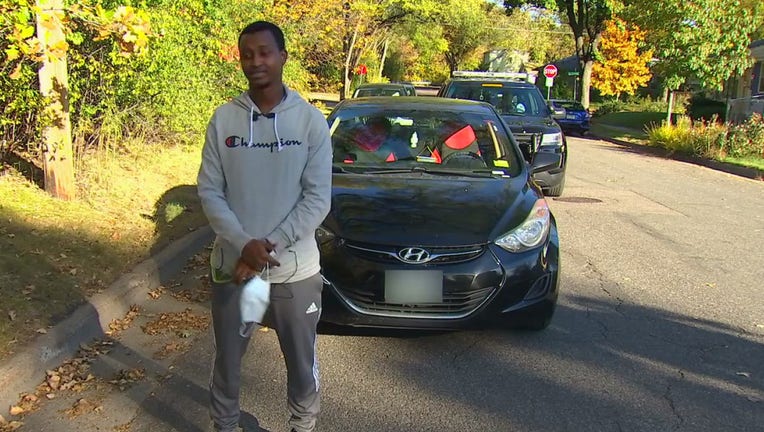 Lyft driver Fahmi Aden was robbed at gunpoint in Minneapolis on Oct. 23.  (FOX 9)

MINNEAPOLIS (FOX 9) - A 19-year-old man has been arrested and charged for his role in robbing a Lyft driver in Minneapolis last month.

William Saffold, 19, of Minneapolis was charged Thursday with first-degree aggravated robbery in connection with the Oct. 23 incident.

According to the charges, the Lyft driver was waiting for a passenger near 52nd Avenue and Queen Avenue North when Saffold and another young man approached him and demanded his wallet and cell phone. Both men were armed.

The victim’s vehicle had a dash camera, which show a black Jeep Grand Cherokee park behind him. Saffold and the driver of the Jeep, who has not been identified, approached the victim and pointed their firearms at him, ordering him out of the vehicle and demanding he unlock his cell phone. They then ran back to the Jeep and drove away.

Police arrested Saffold a short time later while driving he was driving the Jeep. He had a firearm in his possession that resembled the one used during the robbery. Saffold admitted to the robbery, but claimed he was using a "Glock" replica BB gun and not a firearm.

The victim, Fahmi Aden, spoke to FOX 9 shortly after the robbery. He said he knew something was off immediately after he pulled up to the intersection. The two men asked if he was there to pick them up, then they got in his car and put a gun to his head.

Aden said he believed he was "going to die."

The suspects demanded money and when Aden did not have any cash, they ordered him to open up his phone, change the password and transfer all the money in his CashApp account to them, which was about $100.

He said he would still keep driving for Lyft until he can find another job to support his family.

"I'm feeling that I don't have faith anymore, but I am going to try my best to forget what happened today," Aden told FOX 9.

RELATED: 'Don't be distracted': Minneapolis carjacking victim warns others to be careful