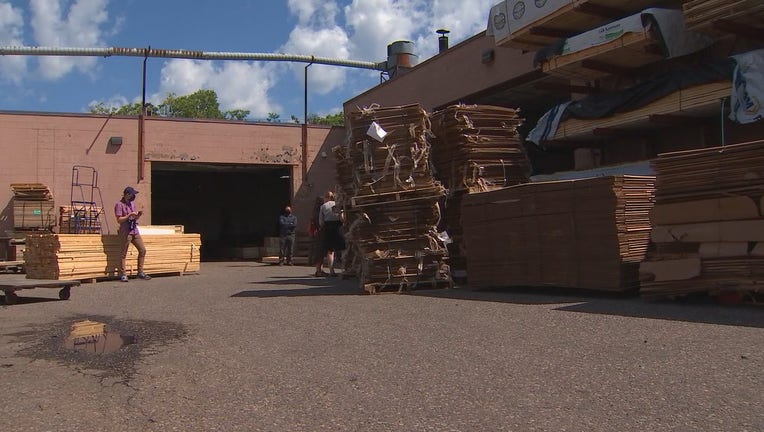 A business that will soon to be transformed into a homeless shelter in Minneapolis.

MINNEAPOLIS (FOX 9) - One of the three new Minneapolis homeless shelters planned for the intersection of Cedar and Franklin is currenlty a long-time family business that will soon serve as the Native-specific homeless population.

Lt. Gov. Peggy Flanagan received a tour inside the Cedar Box Company Tuesday. The company is expected to move out soon and the site will undergo a complete makeover and transform into a 24-hour culturally sensitive homeless shelter and service provider for the Native American community.

Minneapolis leaders give an update on the city's effort to build more homeless shelters and affordable housing to accommodate those in need.

Flanagan reports that the Native population is 27 times more likely to end up homeless than their white counterparts.

“We know housing is the best solution to homelessness and it takes all of us to provide resources and support to build successful shelter and new housing,” said Flanagan.

With homeless tent encampments exploding across Minneapolis from Lake Nokomis to Powderhorn Park, elected officials and stakeholders came together Tuesday to highlight what everyone here refers to as a crisis.

“We are in a state of emergency,” said Angela Conley, a Hennepin County Commissioner. “We are seeing an unprecedented number of people living outside, in places unfit for human habitation.”

Hennepin County, the city and the state are investing millions to make sure those most in need, at the very least, have a bed and roof over their head.

In addition to the Cedar Box location, a women’s shelter is planned inside the Gordon Center in the Willard-Hey neighborhood of North Minneapolis.

Plus, Catholic Charities is helping spearhead a major project on east 14th Street that will eventually provide beds and deeply affordable housing.

Mayor Frey conceded that these three new shelters are expected to be completed by year’s end. They will just put a dent in the crisis, but Frey promised more investments in his upcoming budget.