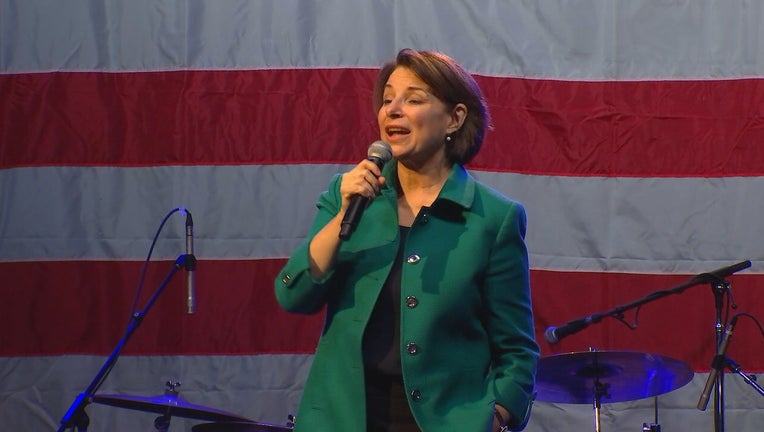 Klobuchar took the First Avenue stage Friday evening for the rally as snowflakes dropped outside.

MINNEAPOLIS (FOX 9) - U.S. Sen. Amy Klobuchar urged her strongest Minnesota supporters Friday night to do everything they could for her in Iowa when she's pulled off the campaign trail for jury duty in next week's Senate impeachment trial.

As snow fell outside on the first day of early voting in Minnesota's presidential primary, Klobuchar spoke to about 200 people at First Avenue, the downtown Minneapolis venue closely associated with the musician Prince. Gov. Tim Walz and U.S. Rep. Angie Craig, who have endorsed Klobuchar, warmed up the crowd.

U.S. Sen. Amy Klobuchar urged her strongest Minnesota supporters Friday night to do everything they could for her in Iowa when she's pulled off the campaign trail for jury duty in next week's Senate impeachment trial.

After the rally, Klobuchar headed to Iowa for campaign events over the next three days. She is stuck in fifth place in the polls there ahead of the Feb. 3 caucuses, and the road only becomes more difficult because of the impeachment trial.

"When I am in that impeachment hearing, I just want you to think, what can I do for Amy today? Because I really need you more than ever to get out the vote," Klobuchar told supporters.

In an interview with FOX 9, Klobuchar said her husband and daughter will campaign for her in Iowa next week while she's in Washington. Klobuchar touted having the most endorsements of Iowa state legislators, people she plans to lean heavily on.

She said she plans to hit the campaign trail whenever there are breaks in the trial, which will last at least through next weekend.

"I just have to hope the people in the early states such as Iowa, Minnesota, New Hampshire, Nevada and South Carolina see that I’m doing my job," Klobuchar said in an interview. "It’s our constitutional duty. It’s what we have to do. And I think they get it."

Klobuchar will have company: rival Democratic candidates Bernie Sanders and Elizabeth Warren are also senators. As jurors, they will get little time on camera and cannot ask questions during the trial.

Klobuchar was at 6 percent in the CNN/Des Moines Register poll released Jan. 10, good for fifth place. That's unchanged from the same poll two months prior.

She has been noncommittal about where she needs to finish in Iowa to continue her campaign -- or to make it to Super Tuesday on March 3, when Minnesota holds its primary.

"Right now I am firmly in the top five. We’ll figure that out," she said. "We are doing so much better than a lot of people predicted."

Klobuchar pushed ahead with her event even as fellow candidate Joe Biden scrapped two campaign stops in Iowa because of the same winter storm Friday.

In their own remarks Friday night, Walz and Craig credited Klobuchar with being a "proven leader."

"(Voters) are just starting to listen. I don’t know what the hell is wrong with people that they’re not paying attention, but they need to now," Walz said.