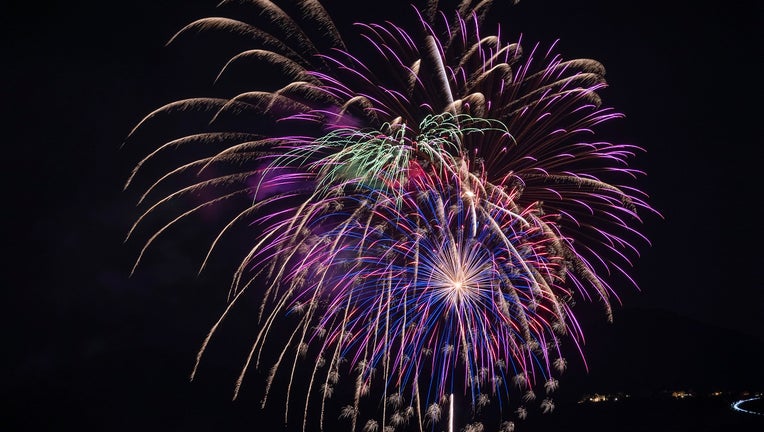 (FOX 9) - After multiple cancellations due to the COVID-19 pandemic, firework celebrations returned last year and continue to grow in 2022.

Below is a list of the largest Fourth of July celebrations across the state of Minnesota.

Annadale: Fireworks will begin at dusk (around 10:00pm) on July 4th at the Annandale Municipal Park.

Ashland, Wisconsin: Celebrate the Fourth with a parade, a carnival, and all-day baseball! Fireworks display over Chequamegon Bay at approx. 10 p.m. on July 4. The fireworks will be launched from the C. Reiss Coal Dock across from the Plaza Park/Post Office/Ashland City Hall.

Baudette: This show will be over Baudette Bay with the best viewing in Willie Walleye Park. Fireworks begin at 10:15 p.m. on July 4.

Bemidji: The Bemidji Jaycees Red, White & Boom Firework Spectacular will launch off the shores Lake Bemidji on July 4 at dusk.

Bloomington: The Summer Fete takes place July 3 from 5-10:30 p.m. Kick off the day with music and various food vendors then watch one of Minnesota's largest firework displays from Normandale Lake Park.

Brainerd: The Fourth of July celebration begins with a parade at 6 p.m. and culminates with fireworks at 10:15 p.m.

Cannon Falls: The 107th Cannon Valley Fair kicks off on July 1 with music, midway fun, and a demolition derby. The Fair runs through the Fourth and culminates in a firework show at dusk on July 4.

Chanhassen: The 39th annual 4th of July Celebration will be held Saturday, July 2, through Monday, July 4. Enjoy live music, local food vendors, a complete carnival, street dance, kids’ activities, and a parade. Fireworks will be on display July 4 at dusk.

Chaska: Fireworks start around 10 p.m. There are several great spots to watch including McKnight Park, Jonathan Elementary, and Jonathan Square; but most people watch from the Chaska Commons shopping area parking lots.

Cornucopia, WI: Celebrate on Cornucopia beach with a bonfire and fireworks at dusk on July 2.

Crosby: Fun in the park all day on July 4 (beer tent, food vendors, live music and more) then a spectacular fireworks display at dusk over Serpent Lake brought to you by Deerwood Bank.

Delano: This celebration dates back to 1857, one of the oldest and largest Fourth of July celebrations in the state. Fireworks begin at 10:30 p.m. on July 4 with seating on the dike near Central Park.

Detroit Lakes:  Enjoy the show on July 4 at dusk along the beautiful Mile Long City Beach.

Duluth: The Independence Day celebration features live music throughout the day and fireworks from 10:10 p.m. to about 10:30 p.m. on July 4.  Live music begins at 4 p.m. in the Bayfront Festival Park. 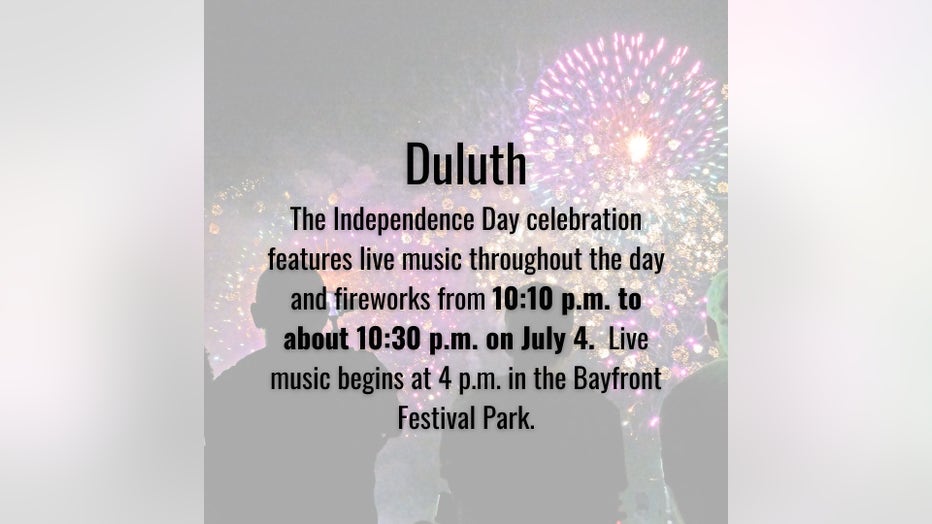 Eagan: Funfest kicks off on July 3 with live bands, rides, lots of food, a parade, and ends with a fireworks show on July 4 at 10 p.m.

Excelsior: Celebrate the day with a parade, petting zoo, and food trucks! Fireworks launch July 4 at 9:50 p.m. at Excelsior Bay.

Ely: The July 4 parade begins at 11 a.m. with a fireworks show by Premier Pyrotechnics is scheduled to start at 10 p.m. on July 4 over Miners Lake.

Grand Rapids: Hill City’s 118th Annual Fourth of July Celebration kicks off July 1 with the Mainstreet Market and a beanbag tournament. The firework show is at dusk on July 4 on Hill Lake held by the Hill City Fire Department and Hill City Lions Club.

Ham Lake: Celebrate at the Freedom Festival on July 2 with a craft market, live music, and bingo! Fireworks at 10 p.m.

Lakeville: The Panorama of Progress or Pan-O-Prog kicks off on July 4 and runs until July 10. Fireworks are at dusk with pre-firework entertainment at Century Middle School.

Madeline Island:  Summer kicks off on the island with this Fourth of July celebration.  The festivities begin with a parade and end with fireworks at 9:45 p.m. on July 4. The Madeline Island Ferry Line will not be running any special later boats on the 4th of July. The last scheduled trip to Bayfield is 10:30 p.m.

Maplewood: Celebrate in Hazelwood Park beginning at 4 p.m. and culminating in a 10 p.m. firework show on July 4. The park will feature food trucks, family activities, and music from Good for Gary.

Mankato: Riverfront Park opens at 5 p.m. on July 4 with live entertainment, food and beverages. Fireworks begin at 10 p.m. and are synced to music from Radio Mankato stations: Hot 96.7, Minnesota 93 and 94.1 KXLP Classic Rock.

Nisswa: Fireworks co-hosted by Madden's Resort and Cragun's Resort launch on July 4 at 10 p.m. Some of the best viewing for the show is on the pool deck at Madden's Resort, but the fireworks can be seen from both resorts, on Gull Lake Cruises, and throughout the lake area.

Orr:  See the fireworks display in Orr Bay on Pelican Lake on July 3 at dusk. A street dance runs from 8 p.m. to midnight and other activities are available throughout the day!

Princeton: Fireworks start at dusk and are put on by the American Legion.

Rochester: The 2022 4th Fest will be held in Soldiers Memorial Field Park on July 4 at 10 p.m. This free event features live music that celebrates the diverse community.

St. Cloud: The 2022 St. Cloud Area Fireworks will be one of the largest pyrotechnics display in central Minnesota on July 4. Great viewing areas are available on both sides of the Mississippi River, in Wilson and Hester parks, along 5th Avenue North, and other parts of the community. The show begins at 10 p.m.

St. Paul: CHS Field in Lowertown St. Paul hosts the St. Paul Saints and celebrates with fireworks July 1-3 after the games. Can't make it to the games? Catch the Saints on Fox 9+ Friday and Saturday!

St Peter: Spend the entire day outside on July 4, including a parade on Washington Avenue at 10 a.m., a Picnic in the Park featuring live music, food vendors and a beer garden from noon to 4 p.m., and fireworks at 10 p.m. 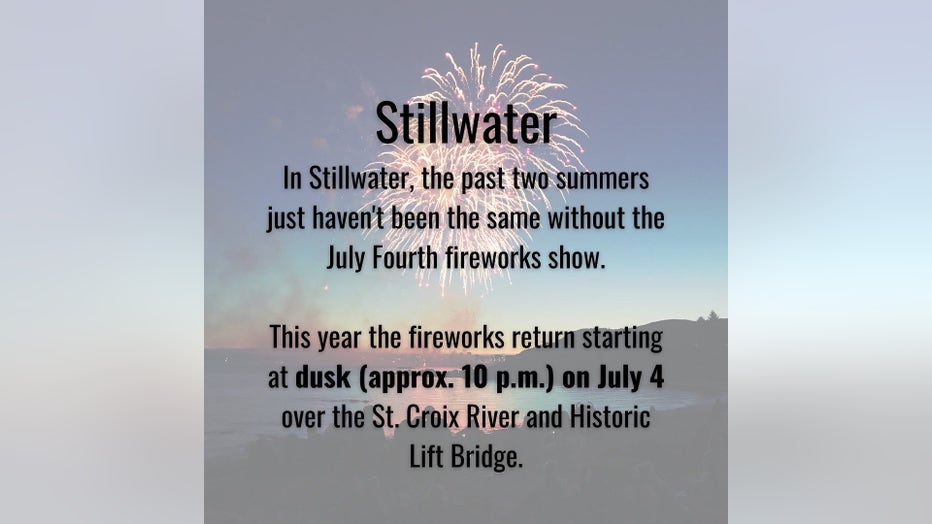 Two Harbors: The Heritage Days festival offers a three-day arts/crafts show, stage entertainment, a street dance and two parades. Fireworks are scheduled for July 4 at approximately 10 p.m., in the event of rain, they will be held July 9.

Wabasha: Grab your friends and find a spot at the Wabasha Athletic Field (across from Dick's Fresh Market) for Fourth of July Fireworks at dusk.

White Bear Lake:  Find concessions and live music in both West Park and Memorial Beach. Fireworks will be on display at dusk.

Woodbury:  Fireworks will be on display at 10 p.m. on July 4 at HealthEast Sport Center.  Celebrate before the fireworks with inflatable games, concessions and live music from The Thrillbillies!

The July 4 holiday weekend is upon us, but that often means your furry friends get spooked by all the fireworks and loud noises. The Animal Humane Society has tips for keeping your pets calm during fireworks.