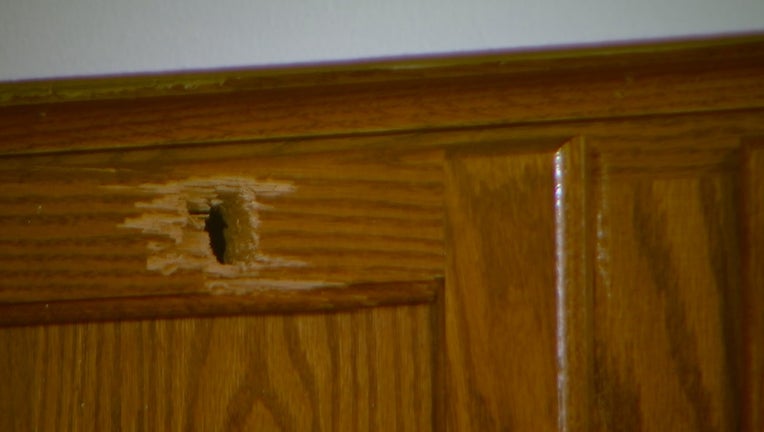 Kou Yang found three bullet holes in his own home, including one in his cabinet. (FOX 9)

MINNEAPOLIS (FOX 9) - A day after a deadly officer-involved shooting in Minneapolis, the Jordan neighborhood is trying to regain a sense of normalcy, especially one neighbor who was almost caught in the crosshairs.

Dozens of bullet holes now cover the front of the home on Thomas Avenue where the shooting happened, but across the street, Kou Yang can point out three bullet holes in his own home.

A day after a deadly officer-involved shooting in Minneapolis, the Jordan neighborhood is trying to regain a sense of normalcy, especially one neighbor who was almost caught in the crosshairs.

“You can see the bullet holes in our kitchen,” said Yang. “These two were pointing towards that way, if you can see the two bullets here hitting the oven. This is steel stainless steel and it went through it like butter here.”

A third bullet went through Yang’s outdoor siding through a cabinet and into another wall.

“It was a major mess,” he said. “Everything was just all over the floor, the sheet rock, the glass.”

Yang says he and his wife were woken up early Sunday morning by gunshots. When they came downstairs, they found the mess. Later that day, Yang says Minnesota Bureau of Criminal Apprehension investigators collected the bullets as evidence.

“They said they think it might have been the other guy’s gun just because it was in this direction,” said Yang. “Obviously, the house is across the street, so the cops wouldn’t be shooting this way.”

No matter where the bullets came from, Yang says all of this has reminded him to be grateful.

“It was pretty scary, you know, it could have hit us in the middle of the night,” he said.

Minneapolis police say the man who was killed was the only person injured in the incident. The case is under investigation by the BCA, which next plans to provide the names of the officers who fired their weapons. The medical examiner will release the autopsy information for the man who died.