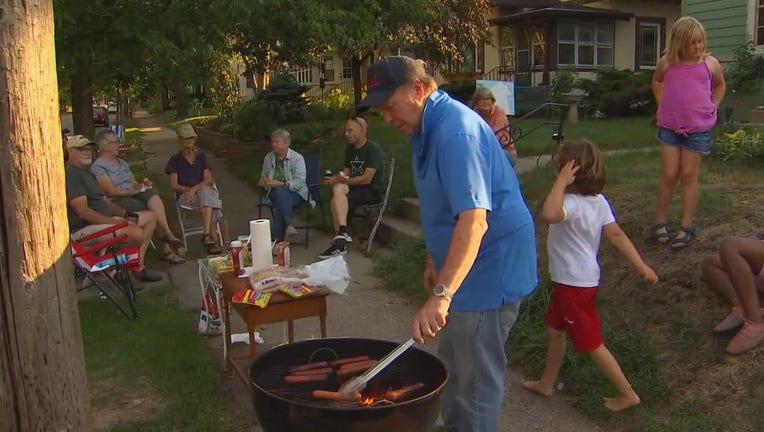 MINNEAPOLIS (FOX 9) - Sometimes a hot dog is just a hot dog but in the Cooper neighborhood of south Minneapolis, a hot dog is a link that connects neighbors to one another.

"It's fun. Free hotdogs and everybody usually brings something and it's good conversation and you get to know your neighbors," said Susan Tertell, a neighbor.

Once a week Andrew Paule fires up the grill to host Hot Dog Mondays in his front yard. It's a chance for people who live on his block to touch base and have frank conversations about life and kids. Sometimes even local politicians stop by for a bite.

"We sit around talk about politics, what's going on in the neighborhood," said Paule. "Sometimes just keep up with each other."

The weekly get-together started during the unrest last year when homeowners banded together to form a neighborhood watch to protect their property.

"The riots had a silver lining," said Paule.

The following the week, Paule started the mini block party to make sure his neighbors could catch up more frequently and it’s been going strong ever since.

"It’s kind of like National Night Out, but on a more regular basis," said Paule. "Keeps our neighborhood together. All the kids know me, everybody knows each other down here. It’s a very tight neighborhood and this helps keep it tight."

It's bring-your-own chair, snacks and opinions. For the neighbors, the chance to get their fill of community is an opportunity they will relish for as long as they can.

"If it didn't want to eat the hotdogs I would bring a salad or something, but no I love the hot dogs," said Tertell. "They are delicious."

Paule says Hot Dog Mondays have gone so well, neighbors the next block down started hosting their own too.