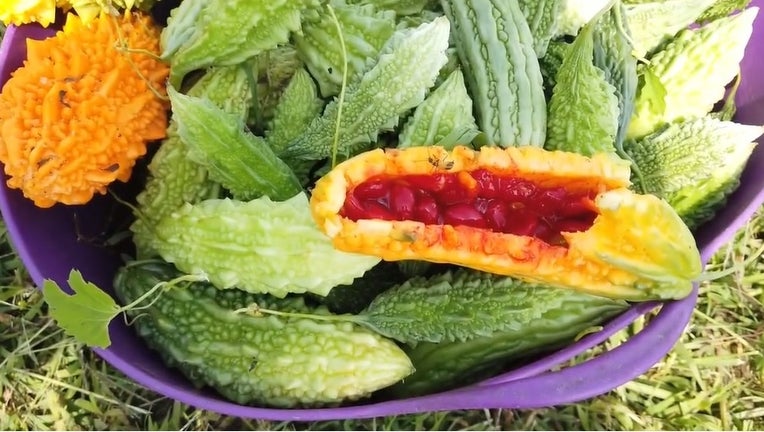 The rainbow of food can be found on a 155-acre farm in Vermillion Township in Dakota County, operated by the Hmong American Farmers Association (HAFA).

In the fields along Highway 52, there are 160 varieties of produce and flowers.

"You’d be surprised what we are growing here in Minnesota," said HAFA's Co-Founder and Executive Producer, Janssen Hang.

HAFA is a land cooperative that supports nearly 100 Hmong farmers from 17 families.  Each red shack in the fields represents a family’s five-acre parcel.

“This is their primary, sole source of income. They’re always at the mercy of Mother Nature.  That’s why they’re so invested, they spend 10 to 15 hours a day here weeding, whatever," Hang said.

Since arriving in Minnesota as refugees in the 1970s, the Hmong have become trailblazers in the local food economy.

Many of these farmers are still first generation. Farming is what they know.

“Clearly you walk into new territory, new country here, you don’t speak the language, hard to navigate... you resort back to your comfort level," Hang said.

Hmong farmers make up half the producers at Twin Cities farmers markets, according to one estimate, part of a locally based food economy that generates $250 million in sales.

They also sell to seven local school districts and have found themselves key players in the farm-to-table movement.

SUPPORTING A WAY OF LIFE

At Tillie’s Farmhouse restaurant in St. Paul, owners Kari and Tom Grittner are committed to local sourcing, proudly displaying their local partners on a chalk board.

“When the Hmong farmers come on Friday, I try to use everything they have," Kari told Fox 9.

But, there are also tradeoffs with the approach. There’s no Sysco truck pulling up in back so if it’s not in season, it’s not on the menu.

Americans have become used to produce and vegetables of all kinds year-round, and it's sometimes cheaper than buying local.

At HAFA, buying local isn’t just trendy, it’s supporting a way of life. But for many of these farmers, language can still be a barrier, as well as financing.

"There isn’t a crop subsidy for specialty crop production," Hang said. "They’re not investing a five-acre crop all in corn or soybeans.”

They are farming without a safety net, at the whims of not just weather, but also consumer tastes. This means preserving a way of life, even as they expand the palate of what it means to be a farmer in Minnesota.