Community members are proposing a land bridge to revitalize St. Paul's Rondo neighborhood, which was divided by Interstate 94.

For decades, Rondo was the heart and soul of the city's Black community, until the '60s when the construction of I-94 cut the neighborhood in half.

Anderson said the project destroyed 700 homes and 300 Black-owned businesses, and created a $270 million loss in equity for the homeowners who had to relocate.

"What the freeway destroyed was the sense of security that a community can give you, that you feel safe here," Anderson said. 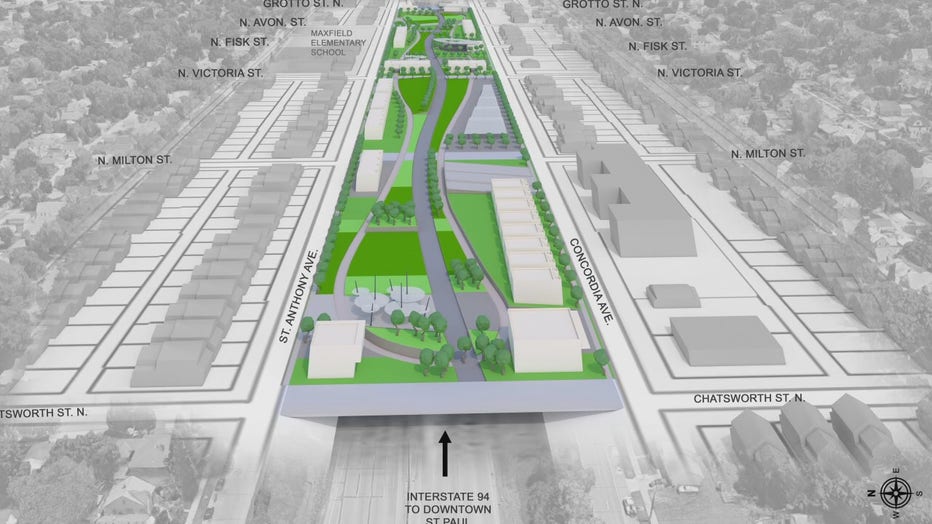 A proposed land bridge for the Rondo neighborhood in St. Paul.

On Tuesday, Anderson's group, Reconnect Rondo, presented an idea to the House Transportation, Finance and Policy Committee. The group proposed to build a land bridge over the freeway, which would create an African American cultural enterprise district with housing and commercial space.

The group is asking the Legislature for $6 million for planning and then for the project to be included in next year's bonding bill, with an estimated price tag of about $480 million.

"We ask you in this committee to work with us on a restorative approach to highway investment that will build a stronger St. Paul and a stronger Minnesota," said St. Paul Mayor Melvin Carter.

"Symbolically, I think there's a beauty to what's happening and that this is truly a bridge. It's a bridge to the past but it’s also a bridge to the future," said Dr. Yohuru Williams with the University of St. Thomas Racial Justice Initiative.

"There is nothing as powerful as an idea whose time has come," Anderson said.