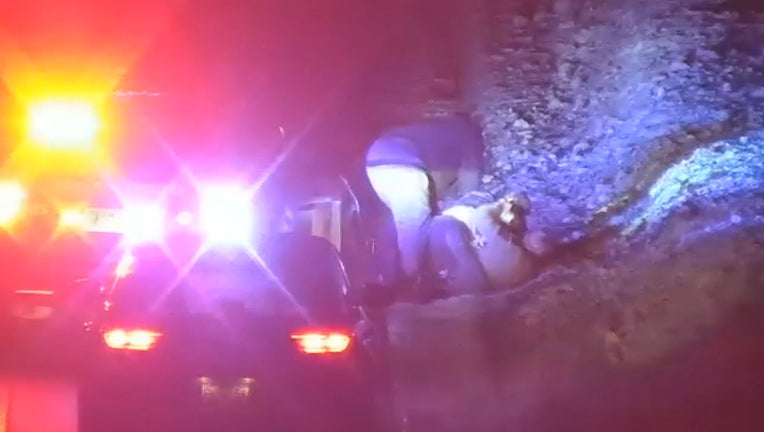 Traffic cam video shows a good Samaritan came to the aid of a Minnesota State Patrol trooper who was attacked by a driver. (MnDOT)

BROOKLYN CENTER, Minn. (FOX 9) - A good Samaritan came to the rescue of a Minnesota State Patrol trooper, who was being attacked during a traffic stop over the weekend. Minnesota Department of Transportation cameras captured the entire harrowing encounter.

It started Sunday night as a one-vehicle crash along Highway 252 in Brooklyn Center - an apparent DWI. While Vincent Williams thought he had stopped to help the driver, that is not who ended up needing his help.

After a Minnesota State Trooper was assaulted on the side of a highway, a passerby jumped him to help.

"I just thought about the officer and if I had drove off what would have happened," said Williams.

Video released by MnDOT shows 38-year-old Matthew Cleve punch a trooper in the face, causing them both to fall to the ground. Cleve ends up on top of the trooper, who is pinned and struggling.

The bad situation was quickly getting worse when Williams pulled up in his vehicle to help.

"By the time I got closer and I got to the officer I seen the guy actually had his hand on his gun and trying to unholster it," said Williams. "So I grabbed him and I put my fist up and I said, ‘I’m fixing to beat your butt,’ but not in those words."

Unafraid, Williams got on top of him and put the driver in a headlock.

"I asked the officer, I said, 'Are you comfortable enough grabbing your Taser?' He said, 'Give me a second, hold him.' So I held him and I hog-tied him, well with my arms and legs," said Williams.

"The good Samaritan got there and was able to help the trooper regain control of the suspect and then after that, the suspect continued to resist and there was a Taser that was used to safely arrest the person and bring him to jail," said Col. Matt Langer of the Minnesota State Patrol.

State Patrol says Cleve was impaired. His history shows he has several past DWIs and assault convictions.

If Williams seems unfazed by it all, it’s because he was a security guard for years. He’s seen a lot.

"I used to do security in rough areas, so it’s all in a day’s work, only for free this time. Me just giving back, I guess," said Williams.

Williams said he was just glad everyone was okay in the end, as was the trooper he helped and all the officers who were on scene to wrap things up.

"He caught his breath, he was real relieved," said Williams. "And I just, I shook everybody’s hand and everybody wanted me to stay and they thanked me and stuff. Felt good. But I’d do it again."

"We are so grateful this good Samaritan stopped and demonstrated the best of Minnesotans," said Langer.