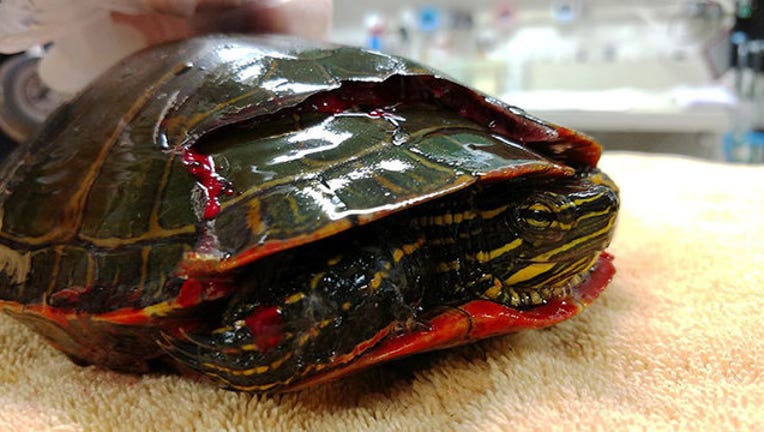 (FOX 9) - Citing an increase in broken turtle shells, wildlife officials are reminding drivers to watch out for turtles crossing the road.

The Minnesota DNR said that this time of year, many female turtles are traveling to nest, looking for good spots to deposit their eggs.

Drivers are asked to allow turtles to cross the road, while also being mindful of traffic.

"As they attempt to cross roads, moving at a turtle’s pace, many are hit and killed by cars. Roadway mortality is believed to be a major factor in turtle population declines throughout the United States," the DNR wrote in a release.

According to the DNR, wildlife rehabilitators have noticed an increase this year in turtles brought in with cracked shells after being struck by cars.

Officials say if you see a turtle crossing, simply pull off the road and turn on hazard lights to alert other drivers to slow down.

-Allow unassisted road crossings. When turtles can safely cross roads unaided due to a lack of oncoming traffic, allow them to do so. Observe from a distance and avoid rapid movements, as doing otherwise will often cause turtles to change direction, stop, or seek shelter within their shells.

-If it's necessary to pick them up, all turtles - except snappers and softshells - should be grasped gently along the shell edge near the mid-point of the body. If it is a snapping turtle or softshell turtle, try to use a car mat and pull it across the road. Many turtles empty their bladder when lifted off the ground, so be careful not to drop them if they should suddenly expel liquid. Avoid excessive handling that can disrupt turtle behavior.

-Maintain direction of travel. Always move turtles in the same direction they were traveling when encountered. Turtles should always be moved across roadways in as direct a line as possible.

-Help document turtle crossing and mortality areas by participating in the Minnesota Turtle Crossing Tally and Count Project. More information can be found at mndnr.gov.

-Turtles injured while trying to cross the road may be taken to your nearest permitted wildlife rehabilitator.