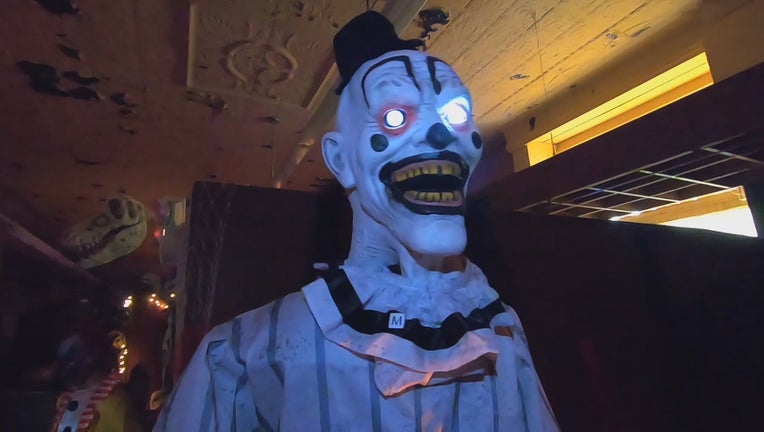 Just one of the creepy clowns that live in Zoo Man's spooky collection. (FOX 9)

SLEEPY EYE, Minn. (FOX 9) - Halloween season has plenty of haunts, whether it’s houses, graveyards or cornfields. But in Sleepy Eye, Minnesota, there’s a different, rather odd way of celebrating.

Crazy creepy and wonderfully weird, at The Zoo Man's Wacky World Of Fun, you get lost in an odd Halloween adventure inspired by historical tidbits and tales of how something eerie ended up here. Like the Zoo Man's collection of dolls.

Crazy creepy and wonderfully weird, at The Zoo Man's Wacky World Of Fun, you get lost in an odd Halloween adventure inspired by historical tidbits and tales of how something eerie ended up here. Like the Zoo Man's collection of dolls.

"I just don’t go out and buy a Barbie doll someplace and put it in my Wacky World of Fun, it has to have a story," explained the Zoo Man.

And a fresh-faced Barbie would likely not make the cut anyway, as Zoo Man's dolls are all blank-faced with a haunting vacant stare. "This is one of the ventriloquist dolls that was actually made here in Sleepy Eye. It was performed in the opera house.  His owner got hit by a train."

Zoo Man’s collection of stuff, like the overwhelming number of crazy, gory, and unbelievably creepy clowns and oversized skeletons, often grows when he hits the road for his traveling reptile show.

"When I travel I try to find different heads from different states," explained the Zoo Man.

"The child that was buried in this coffin died in a dust storm and that’s her doll," the Zoo Man told us.

Some with a sad and haunting tale. "The mom and dad decided they didn’t want her in a clear coffin so they took her out and put her in a regular coffin and they kept the doll. And this was in a barn from 1931 – or 1932 til my wife bought it seven or eight years ago."

At every turn, there’s something new to see or ponder. However, much of this wacky world is just spooky fun. "They never trust me when I say there’s not going to be anyone jumping out at ya but they don’t believe me so then aaahh."

And there are random surprises sprinkled in like a Christmas tree or lunchbox collection. But, the Zoo Man’s life has been a bit random and in some cases tragic.

"Every year of my life something happened, in fourth grade, my uncle got murdered," he explained.

But, as a former teacher, he really just likes making himself and others happy in his own.

Zoo Man says he has documents, photos, and newspapers to back up his stories. Now to hear the stories you have to do the "VIP" tour for $10. It’s just $5 if you want to walk through on your own.