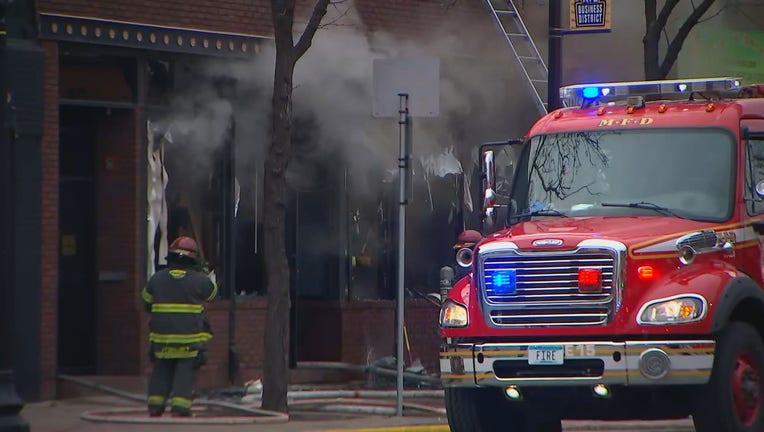 MINNEAPOLIS (FOX 9) - Minneapolis Fire crews worked into the night in Northeast Minneapolis Sunday fighting a fire at a building that houses the restaurant, El Taco Riendo.

According to Minneapolis Fire Chief John Freutel, firefighters knocked down the initial fire at 2412 Central Avenue Northeast, but found that it had spread to 2408 and 2404 Central Avenue as well.

All three buildings were fully involved as crews evacuated residents from the apartments upstairs. Those residents are being assisted by the Minnesota Red Cross.

The Chief said all of the businesses at the three addresses, including El Taco Riendo, were closed at the time of the fire. 2408 Central Avenue houses the National Association of Letter Carriers office.

Minneapolis City Councilor Kevin Reich, who was at the scene of the fire Sunday night, called the outcome a "deep loss," for the Northeast neighborhood community.

He called the section of Central Avenue "the heart of Northeast."

"Gut-wrenching news in the heart of Northeast on top of an already tough week," wrote Frey. "Beyond grateful for the heroic response from our @MinneapolisFire fighters. Their work to keep people safe during this pandemic has been, and will continue to be, indispensable."

El Taco Riendo, which has been been serving up tacos, tortas and more at that location for 11 years, says it's second location in Crystal remains open for takeout orders.

"We’ve been serving you for the last 11 years and we are sure that with your help we are going to stay strong," the restaurant wrote in a Facebook post. "We are glad that we are safe and the lost was only material. Thanks for all the support you’ve given us, we know these are hard times not only for us."