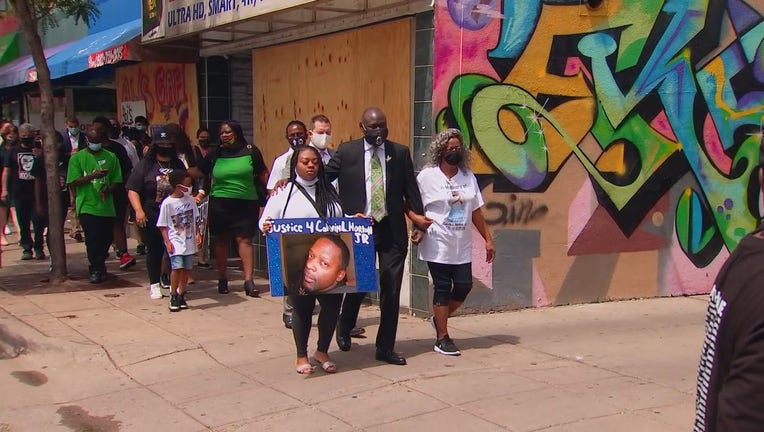 Family and community members gather to demand justice for Calvin Horton, who was fatally shot during the riots in Minneapolis May 27.

MINNEAPOLIS (FOX 9) - Family members and the community gathered Tuesday to mourn the loss of Calvin Horton, who was fatally shot during the riots in Minneapolis on May 27.

On what would have been Calvin Horton’s 44th birthday, his family – and their lawyers – are calling for justice in his death.

“I just want justice for him on his birthday, that’s what I want. I want justice, capital J-u-s-t-i-c-e,” said Mae Roberts, Calvin’s mother.

Calvin’s mother and children say a video circulating on social media from the night he was killed tells the story of what really happened. Horton’s family said the owner of the pawn shop was inside the store shooting out on the street at protesters on the night of May 27.

“He shot out into a crowd of dozens of people, and we know bullets don’t have a name on it. That bullet could have hit anybody,” Roberts said.

The video shows Horton getting first aid from first responders on the sidewalk in front of the store. The family says that eliminates any narrative suggesting the store owner was protecting himself or his property when he started shooting.

“There are protests going all over America, and if we allow business owners to shoot black people protesting for Black Lives Matter, then what kind of message are we sending to the world?

The family also says the video - and their own experience viewing Horton’s body - proves he was shot in the back, not in the chest, as the Hennepin County Medical Examiner reported.

“We’re absolutely heartbroken that the fact that the man who was able to shoot my dad in his back and kill him is still free, and we’re left to feel as if we’re the ones in prison.

The Minneapolis Police Department said they can’t confirm if Horton was inside or outside of the store when he was shot because this is an active homicide investigation. The store owner was arrested shortly after the shooting but was released without charges.

The Hennepin County Attorney’s Office put out a press release Tuesday asking anyone with information to come forward.