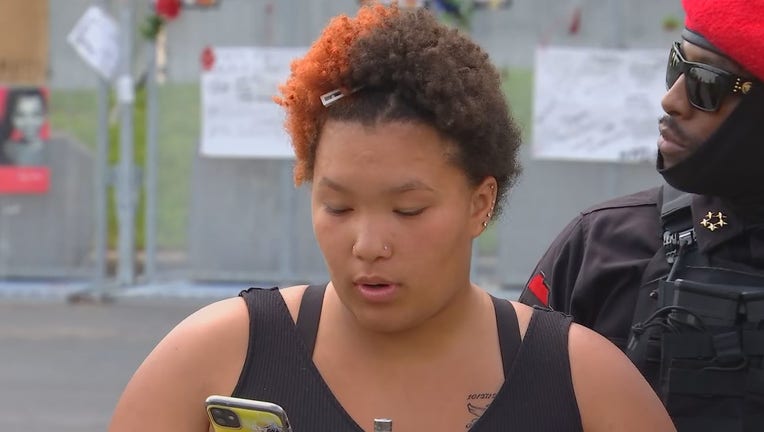 Diamond Wright, Daunte Wright's sister reads a statement from her phone to call on the state to add a murder charge against the former police officer that shot her brother. (FOX 9)

BROOKLYN CENTER, Minn. (FOX 9) - The family of Daunte Wright is renewing a push for a murder charge to be added against the former Brooklyn Center police officer who fatally shot Wright earlier this year.

Kim Potter fatally shot Wright during a traffic stop in April. Body camera video shows she shouted, "Taser, Taser, Taser," and fired her handgun instead of her Taser.

Potter was charged with second-degree manslaughter. Wright's family members say they believe that charge is not enough, comparing the manslaughter charge to former Minneapolis police officer Mohamed Noor who was convicted with third-degree murder in the fatal shooting of Justine Damond.

"Keith Ellison, that was just not another Black man," said Diamond Wright outside the Brooklyn Center Police Department. "That was my brother. Add murder charges, please. Daunte Wright's life matters."

Earlier this week, the defense filed a memo in opposition to video coverage of the trial after the prosecution voiced its support for cameras in the courtroom.

Typically under Minnesota law, video coverage is not allowed during a trial. Hennepin County Judge Peter Cahill allowed cameras in the courtroom for the trial of former Minneapolis police officer Derek Chauvin in the death of George Floyd due to the ongoing pandemic and overwhelming interest in the case.

A judge has yet to rule on allowing video coverage for Potter's trial, which is scheduled for December.