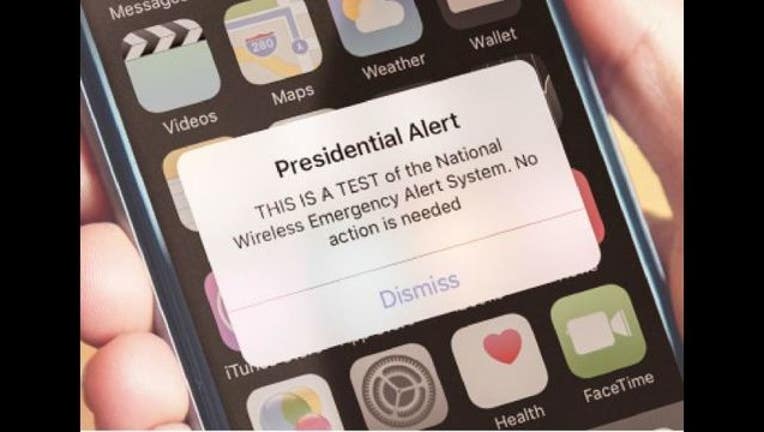 (KMSP) - At 1:18 p.m. Wednesday, everyone in the United States with a cell phone will get a text from the federal government.

For the first time ever, the Federal Emergency Management System is conducting a nationwide test of a new emergency system, Wireless Emergency Alerts. It is being referred to as the “Presidential Alert” and will only be used in cases of a national emergency.

When President Donald Trump presses send on this message, every active cell phone in the country will receive an alert—approximately 225 million smart phones reaching 75 percent of the U.S. population.

The message will read, “THIS IS A TEST of the national wireless emergency alert system. No action is needed."

FEMA says it will sound like an AMBER Alert or weather-related warning with a subject saying "Presidential Alert.”

Wednesday will be the first nationwide test of Wireless Emergency Alerts. FEMA and the Federal Communications Commission are conducting the tests.

The nationwide cell phone test will take place at 1:18 p.m. CT. Two minutes after the cell phone test, another alert to test the Emergency Alert System will be broadcast on radio and television.

In the future, the “Presidential Alerts” will be used to warn the public about dangerous weather, missing children and other critical situations.

Unlike some of the alerts you might receive on your cell phone, you cannot opt out of these ones.

WHAT TO EXPECT ON WEDNESDAY

Your cell phone will sound and vibrate once during the 30-minute test window between 1:18 p.m. and 1:48 p.m. in Minnesota.

If your cell phone is switched on, your phone will sound loudly and vibrate and you will receive a one-time message that says “THIS IS A TEST of the National Wireless Emergency Alert System. No action is needed.”

If you cell phone is switched off or in airplane mode, it will receive the message as soon as you turn it on, as long as it’s within the 30-minute test window.