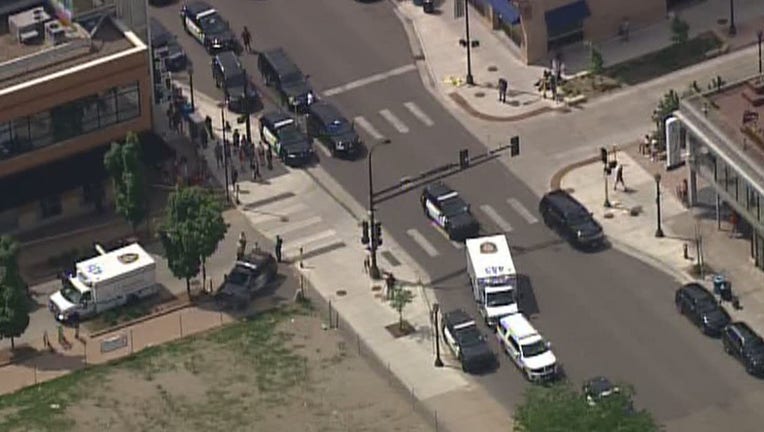 A large police response gathers outside the parking structure near Seven Points, formerly known as Calhoun Square, in the Uptown area of Minneapolis. (FOX 9)

MINNEAPOLIS (FOX 9) - One person is dead following a law enforcement shooting at a parking structure in the Uptown area of Minneapolis, according to a statement from the U.S. Marshal Service.

Thursday around 2:10 p.m., a U.S. Marshal Service taskforce made up of local law enforcement officers were trying to arrest a person wanted on a state arrest warrant for possession of a firearm by a felon.

According to USMS, the person was in a parked car, did not follow commands and took out a handgun. In response, members of the taskforce fired shots and the person died at the scene.

The incident occurred at the parking structure is at Seven Points, the shopping center formerly known as Calhoun Square, in the 1400 block of W. Lake Street. Video from SkyFOX9 chopper appeared to show a body surrounded by emergency vehicles on the top floor of the parking structure.

USMS officials say a woman, who was with the suspect at the time, suffered minor injuries from glass debris.

Agents with the Bureau of Alcohol, Tobacco, Firearms and Explosives (ATF) and Minnesota Bureau of Criminal Apprehension are among those who responded to the scene. The BCA will be the lead agency in the investigation.

A small crowd of protesters gathered near parking garage following the incident to voice their concerns about policing. Shortly after 10 p.m. protesters lit a dumpster on fire in the intersection of Lake Street and Girard Ave South after officers cleared the scene.

Law enforcement sources told FOX 9 the person who died was a murder suspect, but FOX 9 has since learned this information was not accurate.