Dashcam video of looters breaking into CVS Pharmacy in Uptown

Dashcam video from a FOX 9 photojournalist captured the moment looters broke into the CVS Pharmacy in Uptown overnight.

While the shooting did not involve Minneapolis police, tensions started to rise after 10 p.m. last night with some people starting a dumpster on fire. Police and firefighters stayed away, letting the fire burn for more than an hour.

Minneapolis firefighters extinguished a dumpster fire lit by protesters following a deadly law enforcement shooting at a parking garage in the Uptown area.

Then around midnight, police moved in using flash bangs to disperse the crowd. That's when looting started at nearby businesses.

Windows were broken out at Target Express, Walgreens, CVS and several other stores. The extent of the damage is still unclear this morning. 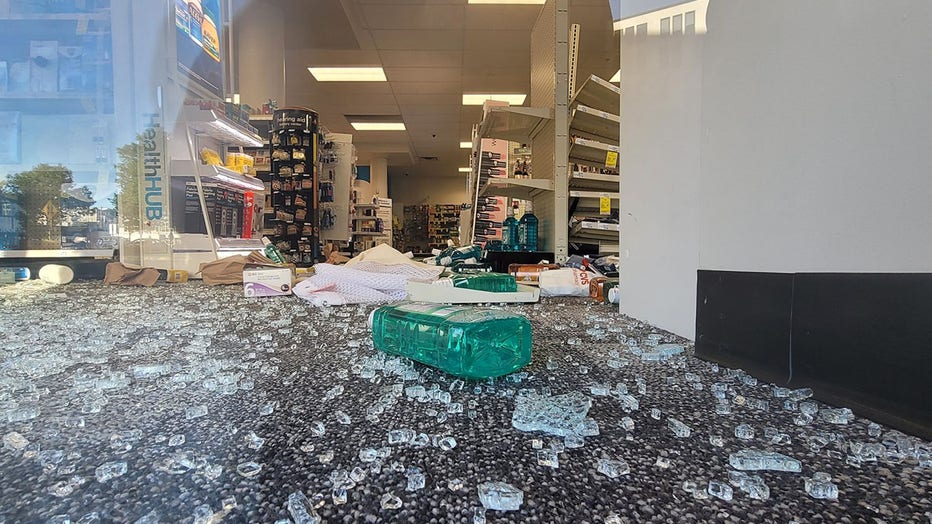 Damage at the pharmacy in CVS after unrest following a deadly law enforcement shooting.  (FOX 9)

This all comes after a U.S. Marshal task force made up of local law enforcement officers shot and killed a man as they tried to arrest him on a warrant for being a felon in possession of a firearm. The confrontation happened on the roof of an Uptown parking garage. Aerial footage showed several unmarked cars surrounding the suspect’s vehicle.

The U.S. Marshal's office said task force members fired at the suspect after he failed to comply with orders and pulled out a handgun. Officials did not say if he fired at law enforcement or if he ever pointed the gun in their direction.

Life-saving measures were attempted, but the man died on the scene. A woman in the suspect's vehicle was treated for minor injuries resulting from glass debris at the scene.

As for the overnight rioting sparked by that incident, Minneapolis police said nine people were arrested on charges ranging from riot and arson to property damage and fourth-degree assault.

Sources told FOX 9 the man who died was a suspect in a murder investigation, but FOX 9 has since learned this information was not accurate.