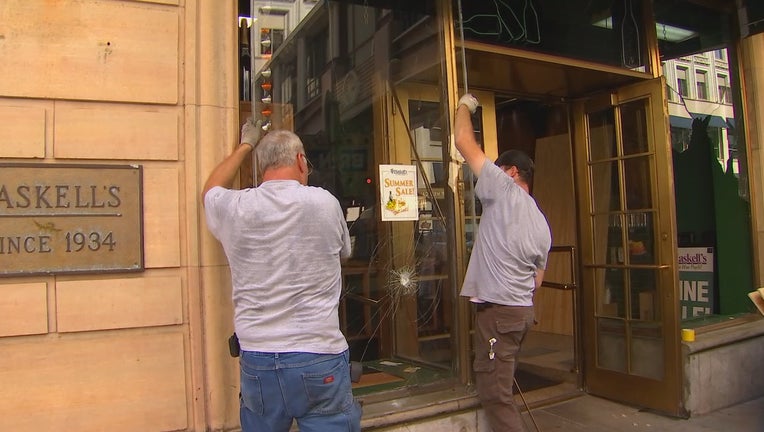 Crews remove a broken window from the storefront of Haskell's liquor store in downtown Minneapolis. (FOX 9)

MINNEAPOLIS (FOX 9) - In the light of day, downtown Minneapolis is almost unrecognizable. Boards are on most of the windows and there’s an air of uncertainty about the future, as some business owners and residents are considering moving out.

"Haskell’s has been downtown for 85 years and what’s gone on the last six months is just unrecognizable," said Ted Farrell, the president of Haskell’s. "You can’t understand that this is Minneapolis."

Boards are on most of the windows and there’s an air of uncertainty about the future, as some business owners and residents are considering moving out.

At Haskell’s liquor store Wednesday night, employees had to hide in the beer cooler as looters smashed the windows. Farrell says closing up the downtown store for good is the likely outcome following the looting.

"You need a lot more enforcement of laws down here," said Farrell. "You got to quit throwing out laws that seem to be working and start employing laws that do and clean the city up."

Business owners are calling for real leadership to save their city.

Forsberg was just trying to keep his restaurant afloat amid the pandemic. The recent unrest is an added blow.

"As my chef is holding the pallets up and I’m drilling them into my door frames as quickly as I can, we had a lot of people trying to breach those and come in - a lot," said Forsberg.

For the downtown dwellers who frequent these very businesses, Wednesday may have been the final straw.

"We did just re-sign our lease, but after that year is over, we’ll be leaving for sure,” said one downtown Minneapolis resident. "I mean, most likely nothing will happen but it’s not a pleasant experience to be looking over your shoulder and feeling anxious."