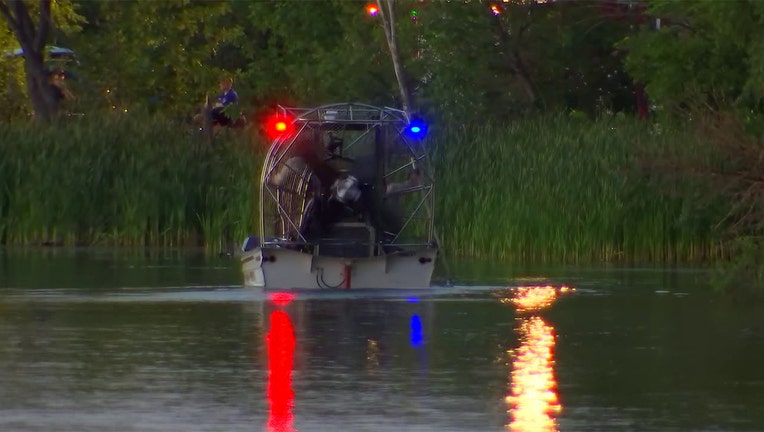 Authorities are at the scene of Vadnais Lake Friday evening, where multiple agencies have been spotted searching the water for three missing people.

VADNAIS HEIGHTS, Minn. (FOX 9) - The Ramsey County Sheriff's Office has released the identities of the three children murdered over the weekend in Vadnais Heights, who authorities say were drowned at the hands of their mother.

Deputies are investigating the deaths Friday night as a triple homicide-suicide, but investigators say the incident began earlier that day with another death.

Maplewood police responded shortly after 10:30 a.m. on Friday, July 1, for a call from Molly Cheng saying her husband had shot himself. Deputies say the medical examiner later determined the death to be a suicide.

Social workers were called in to help Cheng and her children. However, hours later, deputies say a 911 call came in around 4 p.m. from a family member saying Cheng planned to harm her children.

Investigators were able to track Cheng's cell phone to Vadnais-Sucker Lake Park in Vadnais Heights. At about 6 p.m., officers found Cheng's car in the parking lot. Minutes later, search crews found several pairs of kids shoes and vehicle keys on the east side of the lakeshore.

Authorities are at the scene of Vadnais Lake Friday evening, where multiple agencies have been spotted searching the water for victims of a possible triple homicide.

Crews began searches in the water, finding 4-year-old Quadrillion Lee at about 7:30 p.m. Shortly after midnight, the body of 5-year-old Phoenix Lee was recovered from the water. The following morning, July 2, Cheng's body was found at about 10:40 a.m., with the body of 3-year-old Estella Zoo Siab Lee being located 20 minutes later. All three died from drowning and/or smothering.

"Our hearts go out to the family, friends, and community impacted by this terrible tragedy," wrote Undersheriff Mike Martin in a statement. "The Sheriff's Office is continuing to investigate the circumstances of this incident to provide clarity and closure to the surviving family members."