HAMPTON TOWNSHIP, Minn. (FOX 9) - The Dakota County Sheriff's Office is reminding drivers to slow down and move over when they see emergency lights.

The reminder comes after a squad car was struck while responding to a crash Thursday morning, which sent one deputy to the hospital. 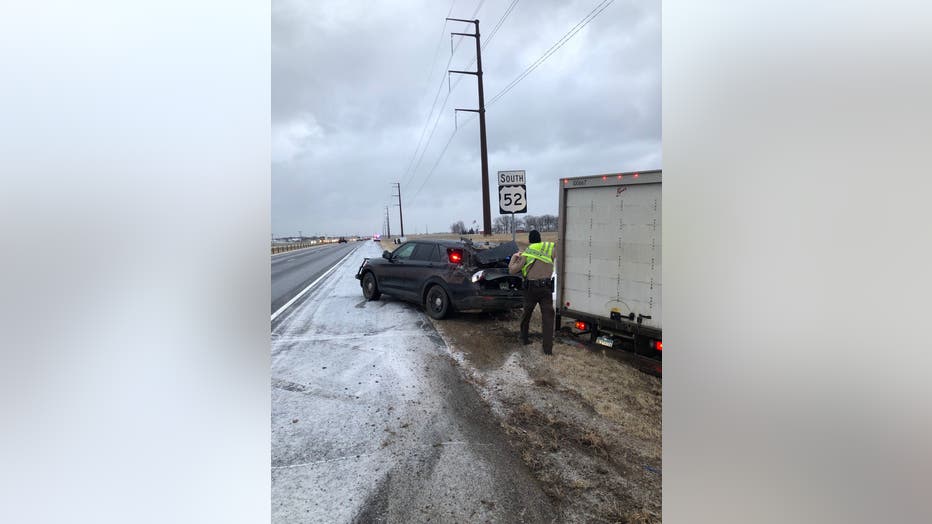 The Dakota County Sheriff's Office is reminding drivers to slow down and move over after a squad car was struck while responding to a crash Thursday morning.  (Dakota Co. Sheriff's Office)

Two Dakota County sheriff's deputies were assisting the Minnesota State Patrol with a single vehicle rollover around 7 a.m. Thursday in the area of southbound Highway 52 and 222nd Street East in Hampton Township, the sheriff's office wrote on Facebook.

The deputies were sitting in a squad car parked on the road's shoulder with the rear emergency lights activated when it was struck by a medium-sized box truck. The driver had lost control on the icy roadway, the post states.

One of the deputies was transported to a hospital, where they were evaluated and released. The driver of the box truck wasn't hurt in the collision.

"The Dakota County Sheriff’s Office, on behalf of the Law Enforcement Community would like to remind drivers that when you seen emergency lights on a Police, Fire, Ambulance, Construction, or Tow vehicle to slow down and move over. When road conditions are poor please drive with caution and due care," the sheriff's office wrote.