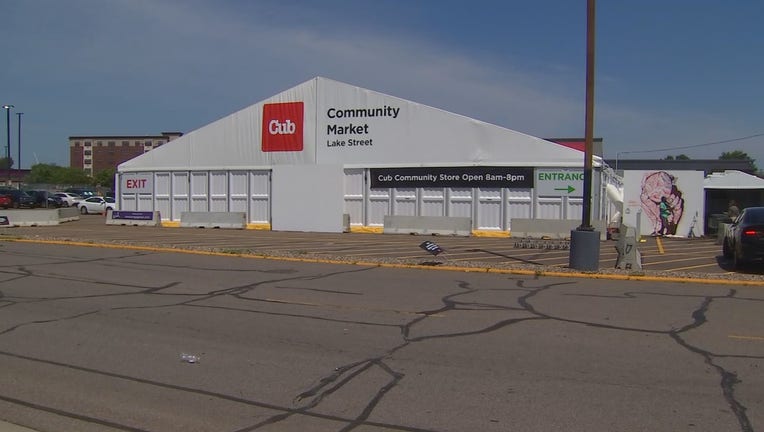 Cub Foods opened a temporary market on Lake Street after the store was damaged in the riots that followed the death of George Floyd.

After several stores were damaged in the riots that followed the death of George Floyd, many community members found themselves without a neighborhood grocery store.

Cub Foods is opening community stores in Minneapolis as they repair two stores that were damaged in the riots that followed the death of George Floyd.

As the company works to repair the Lake Street and Broadway Avenue stores, it will set up temporary community markets. The Lake Street market opened on July 8. Cub expects the Broadway location to open by July 20.

Each market will be approximately 13,000 square feet in size and will offer key items, including fresh produce, meat, dairy, and best-selling grocery items as well as over-the-counter medicines. It will also be air-conditioned.

"I can’t believe they did this so quickly. It’s amazing," said neighbor Tadessa Kifle.

Cub said their two closed stores will reopen sometime this fall. ALDI is also hoping to open in a few months. The Lake Street Target location is still hoping to reopen in late 2020.

Cub also launched a free, dedicated bus service from its Broadway and Lake Street stores to alternative Cub stores in the area for those looking to shop at a traditional Cub location, but lack the transportation to be able to do so.

Customers picked up from the Cub Broadway location will be transported to the Cub Crystal store located at 5301 36th Avenue N. Customers picked up from the Cub Lake Street location will be transported to the Cub Quarry store located at 1540 New Brighton Blvd. The free coach bus service started Wednesday and will run from 10 a.m. to 6 p.m. daily with pickups from the Broadway and Lake Street stores starting each hour, on the hour, and drop off occurring on the half hour. Each bus will have a set of social distancing practices in place, is limited to 20 riders per bus, and will not make stops between stores.