A Crystal, Minnesota law enforcement officer with more than two decades of experience faces multiple charges that he accessed his ex-girlfriend's private information under the guise of fake identity theft and election fraud investigations, then lied to cover his tracks.

(FOX 9) - A Crystal, Minnesota law enforcement officer with more than two decades of experience faces multiple charges that he accessed his ex-girlfriend's private information under the guise of fake identity theft and election fraud investigations, then lied to cover his tracks.

According to the criminal complaint, on June 23, 2021, a victim, age 24, contacted the Crystal Police Department to complain that one of their officers, identified as Lieutenant Derrick Hacker, had unexpectedly shown up at her former boyfriend’s home asking the whereabouts of her and her mother.

At the time, Hacker told a resident at the location that he was investigating an identity theft case involving the victim, but the person doubted his motives since he had been romantically involved with her mother from 2014 to 2016. 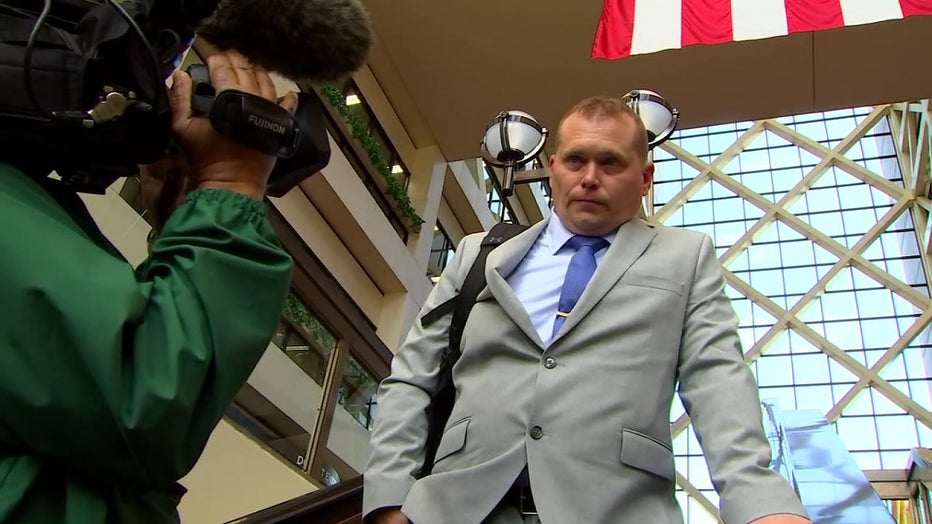 Following the complaint, a Crystal Police deputy chief checked Hacker’s desk at police headquarters and found several handwritten notes pertaining to the victim, including phone numbers and a printout of driver’s license and vehicle information. It was determined the information had been obtained from a secure Minnesota Department of Driver and Vehicle Services (DVS) website – confidential, government data on Minnesota drivers and vehicles that only authorized users may access.

Any use of the website by an officer must be limited to official police business, and when users login they receive an automated message that any misuse of data may result in criminal prosecution.

The Minnesota Bureau of Criminal Apprehension (BCA) assigned an investigator to determine any potential misuse, and learned that the Crystal Police Department had no open identity theft cases involving the victim. However, the investigator found 60 DVS searches from Hacker’s password pertaining to her conducted between Feb. 13, 2019 and June 22, 2021.

When investigators interviewed the victim they confirmed she had been in a relationship with him in the past when she had previously gone through hard times and that, "she did not love the defendant, but [the] defendant loved her." She claimed she had not spoken to him since 2016, and had moved several times since.

Last August investigators interviewed Hacker and he acknowledged he knew that accessing DVS data for non‐work reasons was a misdemeanor offense – and did not deny making DVS queries regarding the victim – but instead said he had been following up on a tip‐line call about stolen mail and identity theft.

However, BCA investigators made an extensive search of police records and found no mail theft or identity theft cases linked to the victim.

Hacker was first employed as a patrol officer at the Crystal Police Department in 1999 and has held six different job titles with the agency over the past 23 years, including the rank of Lieutenant and being assigned to criminal investigations.

A year ago Hacker was listed on the Crystal Police Department website as the head of investigations.

Previously Hacker testified as use of force expert in the Mohamed Noor trial. During the trial Hacker testified Noor perceived a danger that didn't exist, calling the two officers’ actions unreasonable, unacceptable and unsafe.