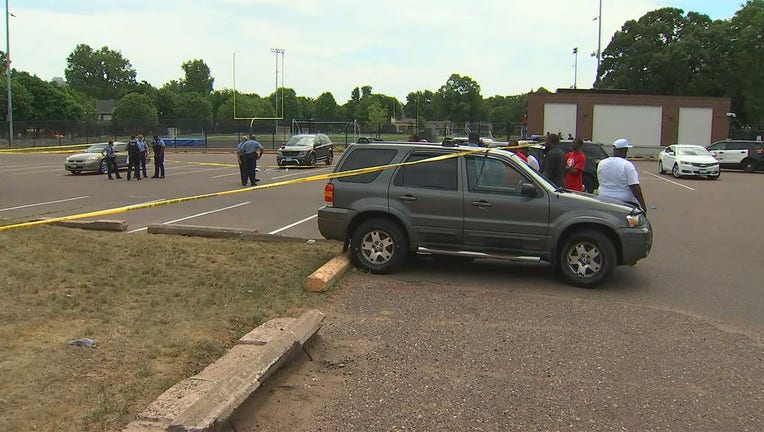 Two people were shot in a parking lot outside Shiloh Temple in Minneapolis on June 11, 2021.  (FOX 9)

MINNEAPOLIS (FOX 9) - A 26-year-old St. Paul man has been charged by warrant in connection to a deadly shooting outside a funeral at Shiloh Temple in Minneapolis earlier this summer.

Kevin Lamarr Mason, 26, is charged with second-degree murder and possessing a firearm after a previous conviction.

The shooting happened on June 11 during the funeral for Christopher Jones Jr., one of the two people shot and killed outside the Monarch nightclub in downtown Minneapolis.

According to the charges, police knew people associated with a north Minneapolis street gang would be attending the funeral and officers were concerned about more possible violence. After hearing shots fired, police arrived at the church and found a man suffering from gunshot wounds to the neck and back. Responders took him to a hospital, where he later died. The Hennepin County Medical Examiner identified the victim as Dontevius Ahmad Catchings, 29, of Minneapolis.

One other person suffered minor injuries from the shooting.

After speaking with witnesses, police learned Catchings and Mason got into a fistfight outside Shiloh Temple, the complaint states. Witnesses say the argument was over a gun that Mason apparently had not returned to Catchings. After the fight appeared to be over, Catchings turned to walk away and Mason pulled out a gun, firing multiple shots at Catchings.

Mason is not in custody and police are unsure of his whereabouts. According to the charges, Mason deleted his Facebook account and left Minnesota. At the time of the shooting, he was on parole, so he is now also a wanted Department of Corrections fugitive.

Mason has a lengthy criminal history including four prior felony convictions for violent crimes.