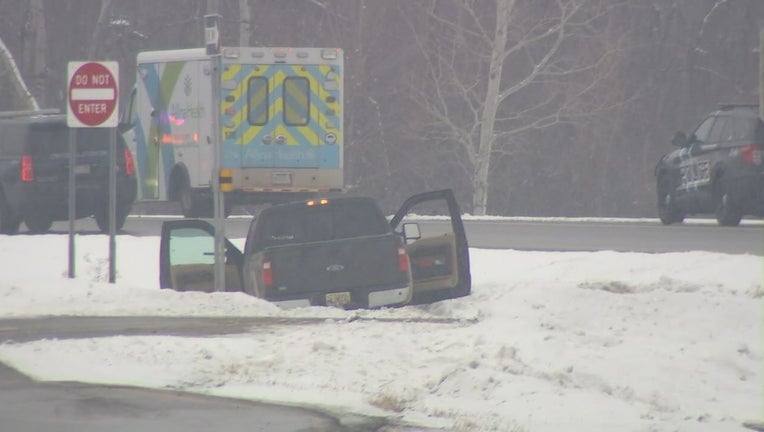 A man was shot and killed by law enforcement Sunday along Highway 65 near Braham, Minnesota after a theft report led to a police chase and crash. This pickup truck was carjacked outside of a Blaine ninja gym earlier in the afternoon while a dad and h (FOX 9)

BLAINE, Minn. (FOX 9) - Before a police pursuit that left one suspect dead in Braham, Minnesota Sunday afternoon, a man and his 9-year-old daughter were carjacked outside a Blaine ninja gym while they waited for a birthday party to begin, charges say.

The charges, filed in Anoka County District Court, say 26-year-old Joseph Heroff, of Hammond, Wisconsin and another man carjacked the victims outside Conquer Ninja Gym just after 1 p.m. Sunday. Then, Heroff and the other man led police on a high-speed pursuit that ended with one of the men being shot and killed by police and Heroff’s arrest. A police K-9 was also shot in the incident, but is expected to survive. K-9 Bravo was released from the hospital and is recovering at home.

Heroff allegedly told police the other man shoplifted merchandise from a Blaine Kohl’s store while Heroff stayed in the car. After the shoplifting, Heroff attempted to drive away, but police stopped the vehicle with a PIT maneuver.

Charges say the two men then got out of the vehicle and fled on foot to the ninja gym where they carjacked the victims and led the pursuit.

Bravo, a K-9 with Anoka Police, continues his recovery after a bullet struck his trachea Sunday. Surgery was not needed, veterinarians said.

Heroff made his first appearance in court Tuesday, where his bail was set at $500,000 without conditions. He is due back in court in March.

His cause of death was homicide due to multiple gunshot wounds.