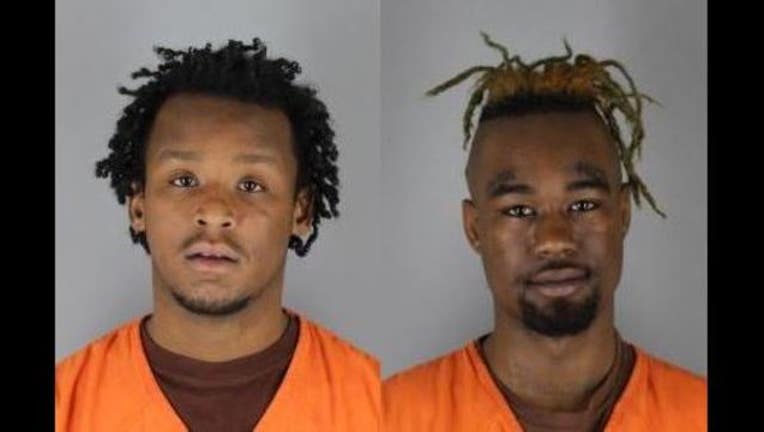 MINNEAPOLIS (KMSP) - Two young men were charged with first degree aggravated robbery after they harassed and robbed an elderly woman Feb. 12 at the Chicago-Lake Transit Center in Minneapolis.

According to the criminal complaint, police became aware of the incident through a graphic Facebook video authorities called "appalling."

Police identified the two aggressors as well as two accomplices, one of whom recorded the incident.

Metro Transit officers were familiar with several people involved, including one of the aggressors, 21-year-old Wesley Norman Martin of Blaine.

Surveillance footage from the transit center shows the victim sitting on a bench while Martin approaches her. An accomplice joined him as they hover over her and appear to yell. She ignores them at first.

After a while, she tries to get up and is repeatedly shoved back down onto the bench. Martin reaches inside her jacket, steals a liquor bottle and puts it in his back pocket. A woman tried to intervene, but Martin pushed her away.

He then proceeds to "run his hands over" her stomach, bottom and thighs, according to the complaint, all while the accomplice hovers over her. The woman tried to push past them, but they grabbed her.

The accomplice then tries to remove her jacket as Martin holds her in place. She continues to struggle and almost makes it to the door of the transit shelter, but the two keep pulling her back.

At this point the other aggressor, 20-year-old Deondre Rasheem Jackson of Minneapolis, can be seen holding up his phone, recording the incident. Martin and the accomplice pull the woman back into the shelter and throw her to the floor. Martin holds her to the ground and gropes her while the accomplice moves the camera in for a close-up of the woman's face.

The accomplice rips off the woman's jacket, but she manages to hold onto it. The woman was in the fetal position on the floor, with both arms clutching her jacket under her head.

Jackson continues recording and can be heard commenting, "That lady look like a hundred years old!"

The woman can be heard yelling, "Help me!" as several people in the shelter stand by.

An older man then steps up and pushes Martin away from the woman. Martin pushes the man back, the man punches Martin and a fight ensues.

According to the complaint, Martin kicked and punched the man in the face, and the man can be seen staggering from the blow.

Meanwhile, Martin's accomplice holds the woman on the ground and tries to rip her shirt from her body, eventually tearing it off. The accomplice then throws the shirt toward Martin, but it falls on the ground. She tries to get it back, but the accomplice rips it away from her and walks away.

Martin and the group leave the station shortly thereafter.

Martin is on probation for conviction of assault in third degree. Jackson has convictions for aggravated robbery, simple robbery and terroristic threats.