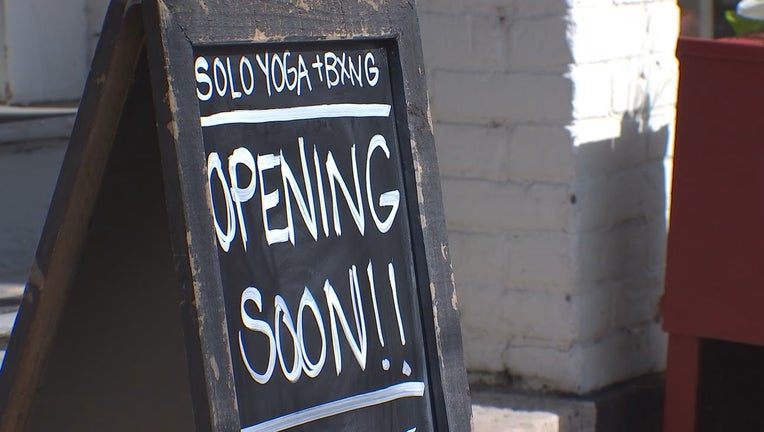 SOLO Yoga + Boxing is preparing to reopen on May 26, the day the order was originally set to expire. (FOX 9)

HUDSON, Wis. (FOX 9) - While the Wisconsin Supreme Court struck down the extension to the governor's Safer at Home order, some businesses in Hudson are taking a slower approach to reopening.

It's a contrast to other parts of the state. Bars in Platteville and Oshkosh made headlines after images on social media showed packed crowds just hours after the court ruling.

While the Wisconsin Supreme Court struck down the extension to the governor's Safer at Home order, some businesses in Hudson are taking a slower approach to reopening

The owner of SOLO Yoga + Boxing says she’s waiting until May 26, the original end date for the order, to open her doors. She says part of the reason for that is because many of her instructors have kids at home and have become “teachers” while their kids are out of school.

“I think our biggest main goal is to create a safe space for people to re-enter back into and something that not just feels physically safe, but mentally and emotionally safe,” owner Edie Brennan said.

Owner of A’la Mode Salonspas, Boni LaVelle says she’s waiting to open until Monday so she can get her staff ready, secure the proper protective gear and make sure she has enough sanitation supplies. Despite the wait, she says she’s been overwhelmed with people calling to make appointments.

“Crazy busy. I cannot believe. Our phone has been ringing off the hook and I have to say it’s mostly people from Minnesota,” LaVelle said.

On Thursday, one day after the ruling was issued by the Wisconsin State Supreme Court, many bars and restaurants in Hudson were still not open for dine-in customers. Some business owners say that’s because the ruling came as a surprise and they just weren’t ready to open. Some businesses are undergoing renovations they decided to take on while they were closed and some are just playing it safe.

Lola American Kitchen still kept their business curbside pickup food and drinks only, but with no restrictions in place on Thursday, allowed customers to hang out on their patio.

“It’s not quite the same but I mean the day is beautiful and you know just to be out here and.. it’s fun to be back out with people nice day refreshing cocktail,” one customer said.