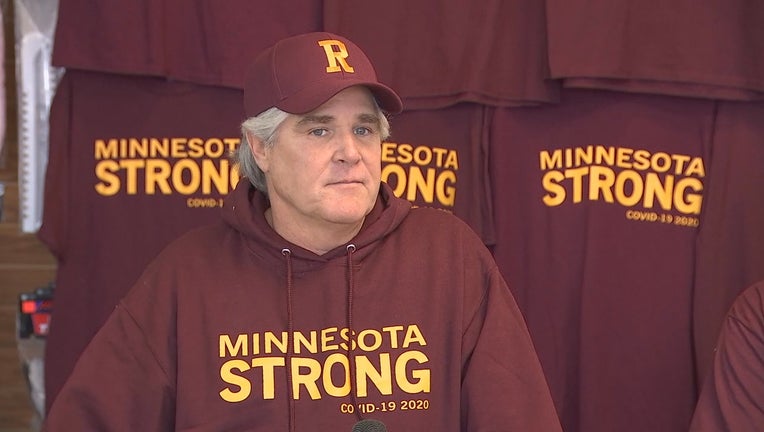 These new shirts might be the thing that saves St. Mane Sporting Goods in Minneapolis. (FOX 9)

EAGAN, Minn. (FOX 9) - A south Minneapolis business owner who was selling “Minnesota Strong” t-shirts and sweatshirts to benefit small businesses made good on his promises Wednesday.

“We were shut down for six weeks,” said Dennis Kloek, of Nokomis Beach Coffee. “We’ve just reopened in the last 2.5 to 3 weeks.”

A south Minneapolis business owner who was selling “Minnesota Strong” t-shirts and sweatshirts to benefit small businesses made good on his promises Wednesday.

While Kloek has seen a huge show of support over the last three weeks, he doesn’t know exactly where his business is going. Therefore, he was thrilled to receive his check for $5,000.

Bob St. Mane was the man who was printing the benefit t-shirts in an effort to keep his own small business sporting goods store afloat.

After he announced the promotion, he said he had so many orders to fill he had to hire three temporary employees to help print them off and package them.

The orders went through the roof. St. Mane pledged that $5 of each sale would go to help small businesses.

Another one of those businesses that received $5,000 Wednesday was Wildcat’s in Eagan. He was joined by Congresswoman Angie Craig to deliver the check.

Craig helped St. Mane and other small businesses get through massive problems getting federal loans. She says there are still problems to work out, however.

“I’ve been working to extend the forgivable loan period from eight weeks to 24 weeks,” she said. “The payback period to five years and to take some of the regulations off how you can spend the money.”

At Wildcat’s, the donation helps, but there is still a lot of worry. They don’t have an outdoor dining space to open in June.