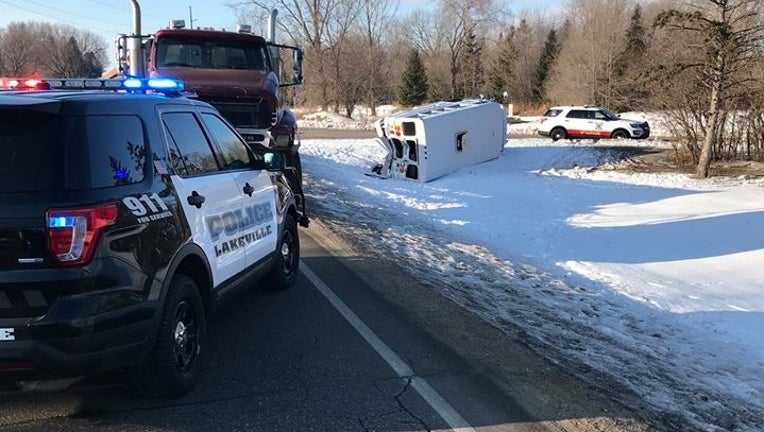 A photo posted by police shows the damage left by the crash. Lakeville police say the bus driver had done her job, making sure the children were in proper restraints, and that was a big reason there were no major injuries. (Lakeville Police Department / Facebook)

The crash occurred at 8:53 a.m. on Dodd Boulevard near the intersection with Foliage Avenue.

According to the Lakeville Police Department, the bus was transporting two boys and two girls, ages 4 to 9, to New Horizon daycare. The bus was headed northeast on Dodd Boulevard when the semi hit it from behind. The collision caused the bus to spin across the opposite lane of traffic and land in the ditch, where it came to rolled on its side. The semi came to rest in the southbound lanes.

When officers arrived at the scene, the bus driver, a 26-year-old woman, had already removed all the children from the bus and was calming them, police said.
Paramedics transported the bus driver and two of the children to the hospital with minor injuries.

Police said all the children on the bus were wearing seatbelts or in car seats at the time of the crash, which is the reason their injuries were only minor.

Police are commending the actions of the bus driver in the aftermath of the crash.

The crash remains under investigation. Police said the case will be forwarded to the Lakeville City Attorney when the investigation is complete.

"This morning, one of our buses was involved in a traffic accident which required the support of emergency medical personnel. Our staff responded swiftly to comfort and support the children, first responders were quickly on site, and for precautionary measures four children and the driver of our bus were transported to a nearby hospital for observation. At this time, we do not have additional information to share. At New Horizon Academy, the safety of our children and staff is our first priority."