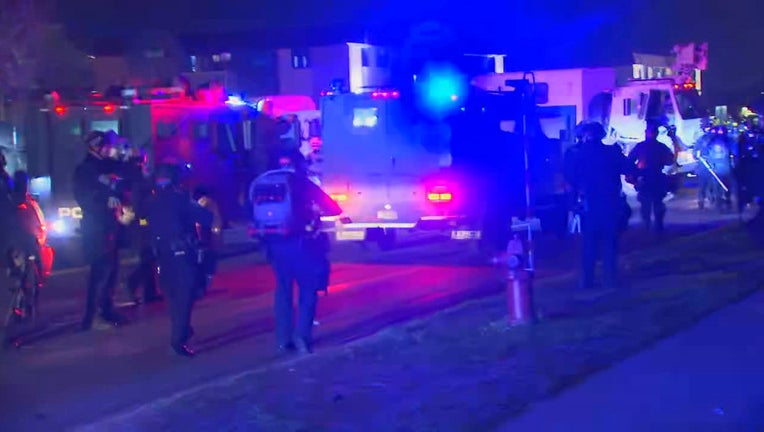 Law enforcement moved in quickly on the sixth night of protests in Brooklyn Center after giving a dispersal order. (FOX 9)

Law enforcement issued a dispersal order after protesters breached the fence outside the Brooklyn Center Police Department on the sixth night of protests following the Daunte Wright shooting.

Wright, 20, was shot and killed by a Brooklyn Center police officer on Sunday during a traffic stop. The officer resigned and has been charged with second-degree manslaughter. The shooting has sparked protests all week.

Initially, the city planned no curfew for the first time this week to "take a different approach," the mayor said in a statement. But around 10:30 p.m., Operation Safety Net announced the mayor had declared an emergency curfew that starts at 11 p.m. Friday until 6 a.m. Saturday.

The curfew followed unrest outside the police department. Shortly after 9:30 p.m. Friday, protesters breached the secondary barrier surrounding the Brooklyn Center police department. In response, law enforcement used flash bangs and pepper spray to push the crowd back. Officials repaired the fence. Protesters continued to throw items, such as glass bottles, over the barricades.

At 9:50 p.m., law enforcement issued a dispersal order, declaring the protest an unlawful assembly, and began to move in on the crowd. A reporter on scene saw at least one use of tear gas. The crowd quickly thinned out following the order. A convoy of police vehicles soon filled the street where protesters had been just minutes before.

No curfew will be in place in Brooklyn Center as protests continue for&nbsp;a sixth consecutive night following the&nbsp;deadly police shooting of Daunte Wright.

Earlier in the evening, law enforcement seemed to be taking the same more laid-back approach as the night before. Officers stood farther back from the barricades, creating more distance between them and the demonstrators.

Col. Matt Langer of the Minnesota State Patrol expressed frustration that the same strategy was not as effective Friday night. Authorities say a small group carrying bats were among the agitators.

At an overnight press conference, law enforcement laid out items, including cans, umbrellas, paint cans and wooden shields, that had been brought into the rally by protesters.

"If we want change in policing, we want reform in policing - let's do that. Let's get together and start reform," said Hennepin County David Hutchinson. "This profession needs help. We can admit that. We're not perfect. We can be better. But these people are not people you should be supporting."

The 10K Foundation, a social justice group created after the death of George Floyd, was among the groups Friday night organizing the rally. Other community leaders have encouraged protesters to attend wearing a bathrobe to show support for a nearby resident who was arrested at the protests while wearing her bathrobe.

While some of the rallies this week have been peaceful, at times the demonstrations have turned violent, leading to clashes with law enforcement and also looting of stores. Officers have used chemical irritants and flash bangs on protesters.

In a letter, Sheriff Hutchinson called out the City of Brooklyn Center for creating "significant confusion" regarding mutual aid response amid the ongoing unrest. The city council passed a resolution to ban the use of some crowd control tactics, such as tear gas, which the mayor supported. However, the sheriff says the resolution does not apply to the joint law enforcement operation responding to the protests.

Thursday night, Brooklyn Center Acting City Manager Reggie Edwards announced the city will be contracting with an organization to provide community interveners to help diffuse tension at the rallies.