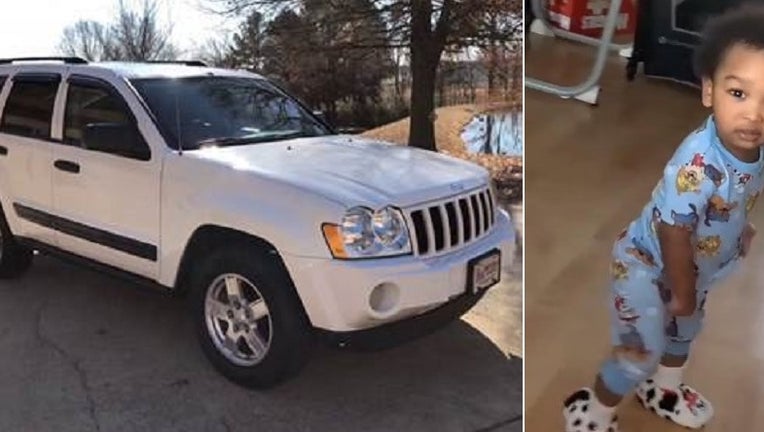 A photo of the missing child and vehicle from the Amber Alert that Minneapolis police issued on Saturday. (Supplied)

MINNEAPOLIS (FOX 9) - Police say they have located a child reported missing in Minneapolis after a vehicle theft on Saturday.

According to police, the SUV was stolen at 12:17 p.m. from the 4200 block of Humboldt Ave North while a 1-year-old child was in the back seat. Officers say the car was taken when a family member ran into the house to grab an item before leaving, and a man ran up and got in the car.

Police say they have located a child reported missing in Minneapolis after a vehicle theft on Saturday.

But, at 2:40 p.m., police said the child and vehicle were found in Brooklyn Center. The Minnesota BCA said the boy was safe.

Police were concerned the thief may have abandoned the vehicle after realizing the child was inside, putting the child in extreme danger due to the low temperatures.

"It could be tucked and hidden. The child could be sitting in the car and we are in subzero temperatures," said police spokesperson John Elder.

In the end, police say that is exactly what happened. The vehicle was found abandoned behind a church on Brooklyn Boulevard in Brooklyn Center. Thankfully, the vehicle was left running and the child was safe.

"He was all smiles when officer came to pick up," said police spokesperson John Elder. "He seems to be a very good-natured child."

Police say a missing boy was found safe Saturday afternoon after an extensive search following an Amber Alert issued after the boy was taken in a stolen vehicle.

One of the people who helped bring the search to a safe end was Barbara Gusse who lives near the church and spotted the vehicle.

"I went out to see my birds and I saw that white car sitting in the parking lot of the church right here... it’s running and I couldn’t see anyone in it," explained Gusse.

Gusse says the vehicle was still sitting there unattended when she got the Amber Alert on her phone.

"I was a mess because I knew when there's an Amber Alert, there’s a kid and I don’t care what age it is. It’s a kid," she said.

Thanks to her quick action, Brooklyn Center police showed up in a hurry. Nearly two and a half hours after the ordeal began, the little boy was found safe and warm in the stolen car.

"I'm just glad because when it's this cold, I’m just glad that car was running because that’s what kept me nosy, kept on seeing that exhaust," she added.

The search for the suspect is ongoing, police say, and they are reviewing surveillance footage in the area. The man will face kidnapping and car theft charges when apprehended.