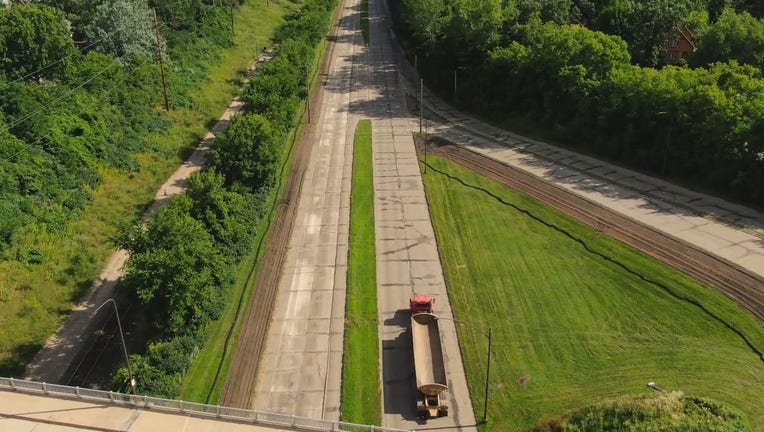 St. Paul's Ayd Mill Road is finally getting a facelift, leaving many residents pleased while others are concerned the money could be better spent elsewhere.

ST. PAUL, Minn. (FOX 9) - A major expressway in St. Paul is closing until November for construction - and the move is stirring controversy.

The months-long project on Ayd Mill Road is good news for some residents but concerning to others.

Ayd Mill Road in St. Paul will be closed for the next few months for a construction project.

Ayd Mill Road is one of the roughest stretches for drivers in St. Paul, and now, the 1.5 mile expressway between 35E and Selby Avenue is getting a facelift.

“I'm looking forward to biking down there. I'm really happy for that. I think it will help with traffic, quiet things down. It’s a good use of the space," resident Andreas Shram said.

The road will be closed until November while crews reduce it from four lanes to three, add a shared pedestrian and bike trail, new asphalt and permanent stoplights.

People who use it say repairing the so called "road to nowhere" with its many potholes and crumbling pavement is long overdue.

“I use the road a lot to get to and from work, but if it means they are fixing it finally, I'm okay with it,” resident Greg Lee said.

“I've lived here for a while, and it’s really noisy and all the traffic is people from out of the city who come in the city, and I know it needs to happen. We have needs, too," resident Jan Mandell said.

Some neighbors say spending $7.5 million on the project is too much, especially at a time when the city has extra expenses because of the pandemic and the unrest following the death of George Floyd. But, others say making this part of the city more bike and pedestrian-friendly is a good investment.

“I think the more bike and pedestrian infrastructure we have in Minneapolis and St. Paul, the better," resident Natalie Vestin said.

“There are some other monies that are spent for less valuable things. I am all for it,” Shram said.

Ayd Mill Road has been at the center of controversy since its beginning. The road was originally envisioned to be a shortcut between 35E and I-94, but opposition from some neighborhood groups in the area meant it stopped at Selby Avenue.