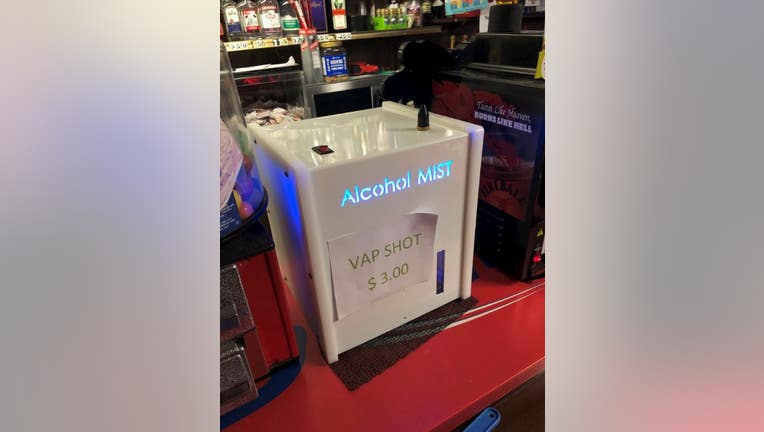 HAMPTON, Minn. (FOX 9) - Authorities are warning people about the dangers of alcohol vaping after they recently confiscated an alcohol vaping device from a bar in Hampton Minnesota.

Last month, the Minnesota Department of Public Safety Alcohol and Gambling Enforcement Division received an anonymous complaint that the Roundup Bar in Hampton was selling vape shots for $3 apiece. It is illegal to own and operate an alcohol vaping machine in Minnesota.

Authorities are warning people about the dangers of alcohol vaping after they recently confiscated an alcohol vaping device from a bar in Hampton Minnesota.&nbsp;

Authorities confiscated the device and fined the bar owner, who said he did not know it was illegal in Minnesota and never intended to put his customers at risk. He said he bought the alcohol vaping machine online over the summer after hearing about it from a friend in Wisconsin.

The bar owner joined DPS officials and medical experts at a news conference Wednesday to help educate others about the state’s law and raise awareness about the risks of alcohol vaping.

Last month, authorities confiscated an illegal alcohol vaping machine from a bar in Hampton, Minnesota and fined the bar's owner, who is now hoping to educate other establishment owners about the law and the risks of alcohol vaping.

“I admit I didn’t do my research,” Curt Woldengen, owner of the Roundup Bar, said. “This is a great lesson for me and other establishment owners to do your research before buying a new product. Check with local and state authorities to see if it is legal. Most importantly, make sure it will not be harmful to those in your community.”

“Our lungs are perfectly designed for what they are supposed to which is exchange oxygen and filter out things like pathogens, bacteria, viruses, debris and dust from our environment,” said Dr. Ann Arens of the Minnesota Poison Control System. “What our lungs are not supposed to do are to be exposed to chemicals or poisons such as alcohol, so we cannot predict what the short or long-term effects of inhaled alcohol or vaporized alcohol are.”

The alcohol vaping machine at the Roundup Bar was the first such device confiscated in Minnesota. The state’s Alcohol and Enforcement Division has emailed bars and restaurants with liquor licenses about the illegal device.